London Budget’s a big fan of Granary Square, the peaceful and rather modern new area a short walk up from King’s Cross. And we’re a fan despite having never even danced around in the fountains there. (Promise.)

On weekday lunchtimes (Tuesdays to Fridays), street food collaborators Kerb put on a collection of traders in the space, calling it Kerb KX. I must admit I’ve never been – despite absolutely longing to – but I certainly do envy all those that are around the King’s Cross area during lunch, being able to try all those delicious options…! 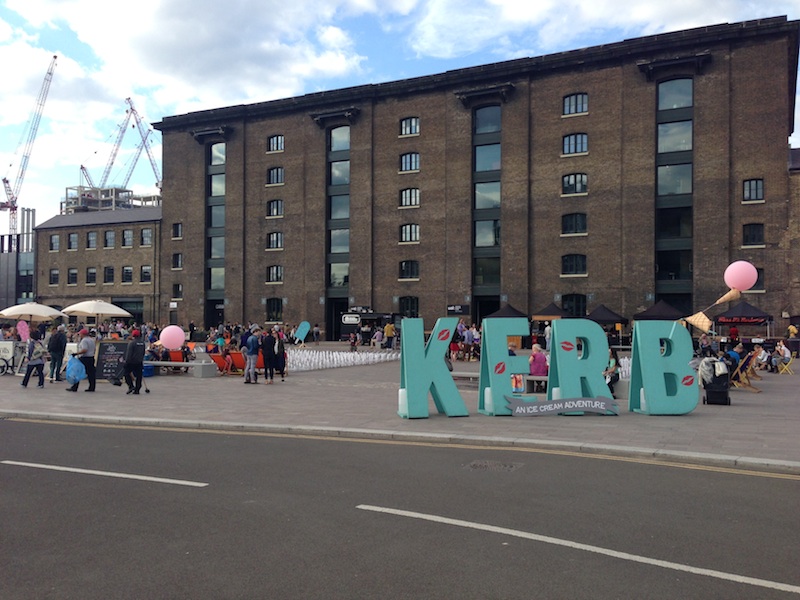 Kerb do also host monthly events in the same space in summer called Ice Cream Adventure – with a name like that, you know you like it already. This past Saturday, twelve ice cream vendors were dotted around the edge of Granary Square offering up their delicious frozen treats – everything from ice cream cakes and cookie sandwiches to ice cream and doughnut combos, as well as unusual flavours galore including alcoholic kinds.

The weather wasn’t quite as kind as it might have been, but there were still plenty of ‘punters’ lazing about in the Square’s deckchairs, as well as children and dogs running in and out of the magical fountains. (Although I imagine they’re there year-round.) The fake grass seating area by the canal was also packed and a delightful place to sit, watching the boats and cyclists go by. (The latter being on the path, of course.) 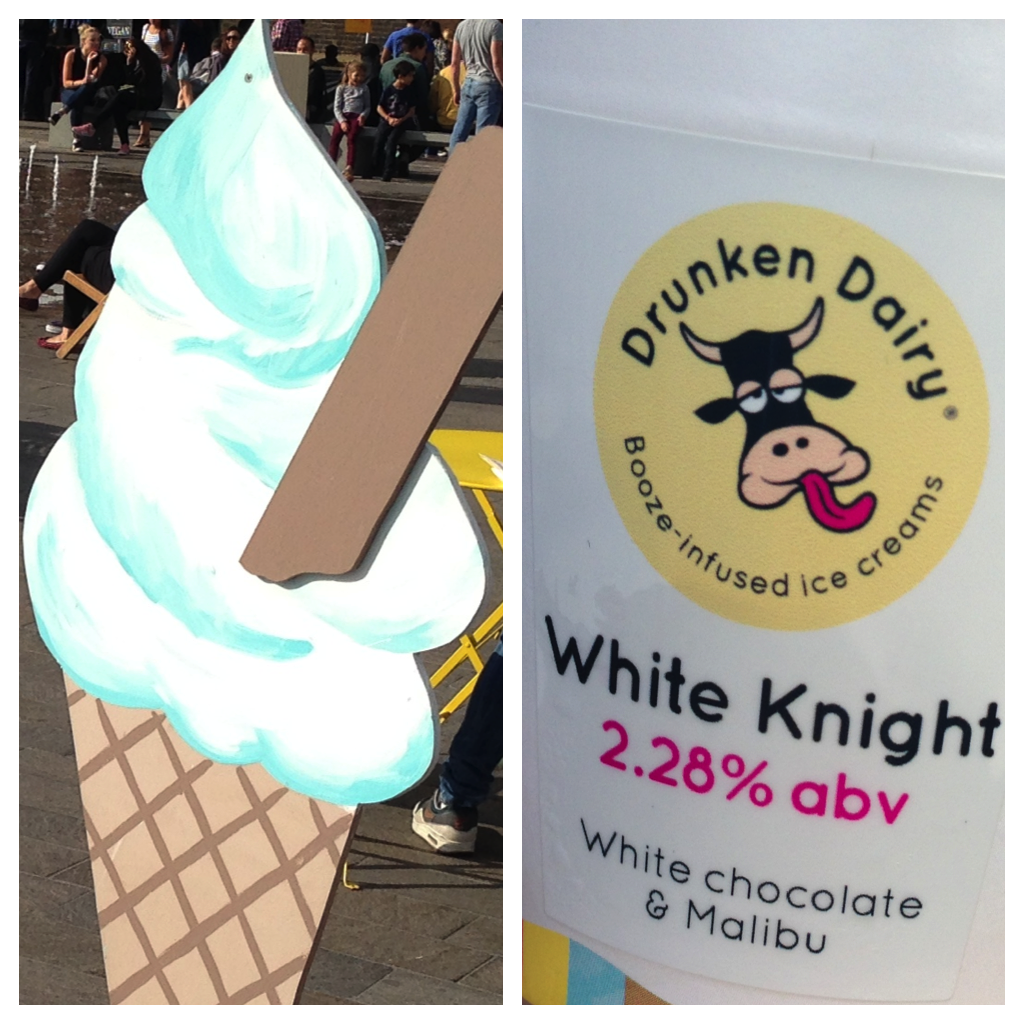 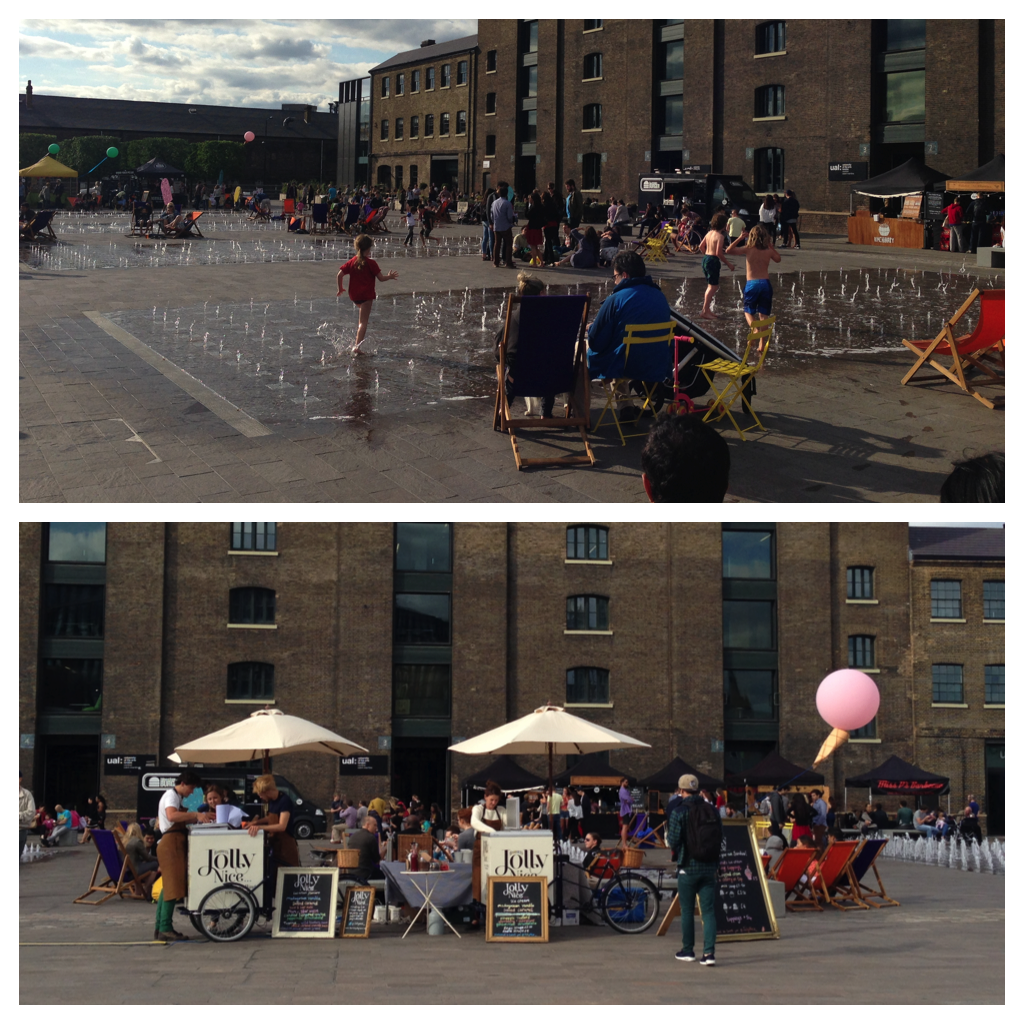 Kerb suggested that most stalls were doing a £1.50 special, allowing you to try decent portions of some items for a special price. We’d turned up a little late to see any of this in action (but I have no doubt it did!) so just opted for regular, pile-it-high ice cream – beer and nuts (yup, you read that right) ice cream from organic specialists Jolly Nice, plus white chocolate and Malibu flavour (known as a ‘White Knight’) from the Drunken Dairy.

There were also a number of regular street food stalls, from pizza to BBQ to burgers, plus a pop-up cocktail bar and a beer bar too. A older gentleman manned a DJ tent with what would be best described as an eclectic range of tunes (all vinyl – that’s some collection must have) before the main MC took over with what must best be described as ‘Now That’s What I Call Top 80s Power Ballads’. (How did they know I’d be there?!)

A very pleasant Saturday afternoon in one of my favourite spots of London! Check out the next installment – the last for this year – on 20th September.