You are here: Home > London Transport > Cabs and Taxis in London

Cabs and Taxis in London

When people think of taxis in London, it’s usually the famous Black Cabs (the “official” cabs)! Unfortunately, these can be quite a pricey way of getting around town, although the cost isn’t too bad if sharing with others – most fit up to a maximum of 5 people, although you may notice some larger, Mercedes people carrier ones too.

Like buses, you’re often at the mercy of London traffic, but unlike buses you’ll find yourself sitting there watching the fare meter go up and up. This Taxi Fares page from the Transport for London website gives an idea of fares – you’ll note that fares are more expensive after 8pm, and then again after 10pm. Black cabs have orange lights on the top of them that say “For Hire” – if this light is on, it means that you can hail this cab, just stick your arm out and the cab will stop. If they don’t…well, sometimes it happens! Don’t take it personally, just hail another one. 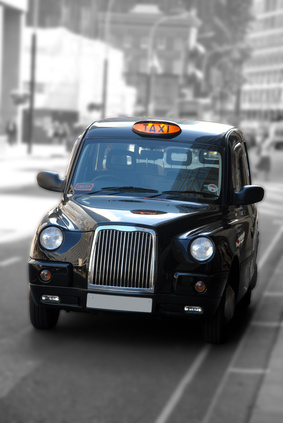 We wouldn’t especially relying on taxis in London for the majority of your transport needs in the city, though sometimes it’s necessary – right? Try taking them for shorter trips when oftentimes public transport options aren’t that direct; better still, if you’re with a group of people when the fare can be split several ways.

There are also minicabs (i.e. cabs using ordinary cars). There are plenty of trustworthy licensed minicab firms; however, you should note that there are also some unlicensed minicabs (usually just a person and his car) that operate as well. This doesn’t automatically mean they’re dangerous, but we would always recommended that you do not hire them at all (they are illegal, after all!), especially if you’re a lone female. Try asking at your place of stay for a trustworthy minicab firm; alternatively, you can look up licensed firms on the Minicabs – Findaride page.

Apps for Taxis in London

We’re just started using two great smartphone apps for our taxi and minicab needs in London. One helps you get a cab as fast as possible, whilst the other lets you easily compare quotes from a number of nearby minicab firms.

Hailo is an app for black cabs – the app will automatically locate your location, and then show you all the cabs that are currently driving around the nearby area! Simply type in your actual address/location, and along will come a cab! You do have to create an account to use the app, but you can pay for your journey with case. Alternatively, you might find it easier to register card details on the app, which will automatically be charged. (No asking to use a cash machine half through your journey!)

Kabbee, on the other hand, is a great app if you’re trying to get a minicab to go somewhere cheaply. Once again, enter in your location details as well as your destination – the app will then list cab firms and their prices, alongside the pick up time. Once again, you can pay by cash or store a credit card on the app. You can even use to pre-book journeys for some point in the future.