By Anna on March 14, 2013 in Eating, Peruvian, Restaurants, Reviews

For reasons slightly unknown, it seems that Peruvian cuisine has become all the rage in London recently. From the super-trendy Ceviche in Soho to the ‘concept’ restaurant Lima, it seems like it’s all systems Peru in the city in the last year or so. However, there’s another, slightly more neighbourhood restaurant that’s well worth a visit if you fancy trying some Peruvian food in London – Islington’s Tierra Peru.

Tierra Peru on Essex Road, N1 in Islington is the restaurant in question – it’s perhaps not in any particular location that you might walk past unless you lived in the area (seeing as it’s quite a bit up Essex Road and away from hustle and bustle of Upper Street and the area around the N1 Centre) but it’s definitely worth a visit – which you can combine with a drink or two in one of the area’s many pubs and bars.

This time round (my third time to Tierra Peru, but only second dining – more of that later) I was dining out having been lucky enough to be a recent visitor to the actual country of Peru where I enjoyed great deal of Peruvian cuisine – think plenty of lomo soltado (of varying degrees of quality – it can be a rather simple dish, after all!), aji de galina, alpaca, tacu tacu and yes, even some cuy (guinea pig). This visit to Tierra Peru was a treat to revisit some of what I’d tried in Peru, as well as taking in some of typical Peruvian classics – pisco sour, anyone?

The first time I went, in January 2012, was shortly after the restaurant opened. On that very cold winter’s day, there are three things I remember about visiting Tierra Peru – that the heating was on far too high (although I suppose, warm diners are better than shivering ones!); the incredibly attentive service; and the slightly empty venue – we were only one of two tables occupied that night. However, I put that last one down to the fact (apart from the weather) that the restaurant was new and not much press had been thrown its way yet. (Certainly, on that particular evening, we’d not known about Tierra Peru – we’d been heading to a sushi restaurant before ducking in to try some Peruvian cuisine instead.)

My second visit was just prior to my trip to Peru, almost like a bit of homework. This was markedly different to the first – the restaurant was so jam-packed, that we couldn’t even get a table! (Yes, I know…should have reserved.)

Third time lucky (amazing what you can do with a reservation) we returned to Tierra Peru to once again be met by some very friendly and incredibly attentive service. There’s a number of Peruvian artefacts all over the ways as well as a small TV screen at the top of the restaurant, showing a DVD that I’m sure must be called “Scenes of Peru”. I delighted – yes, in a snobby way – at being able to actually name some of what I was now watching on the screen! 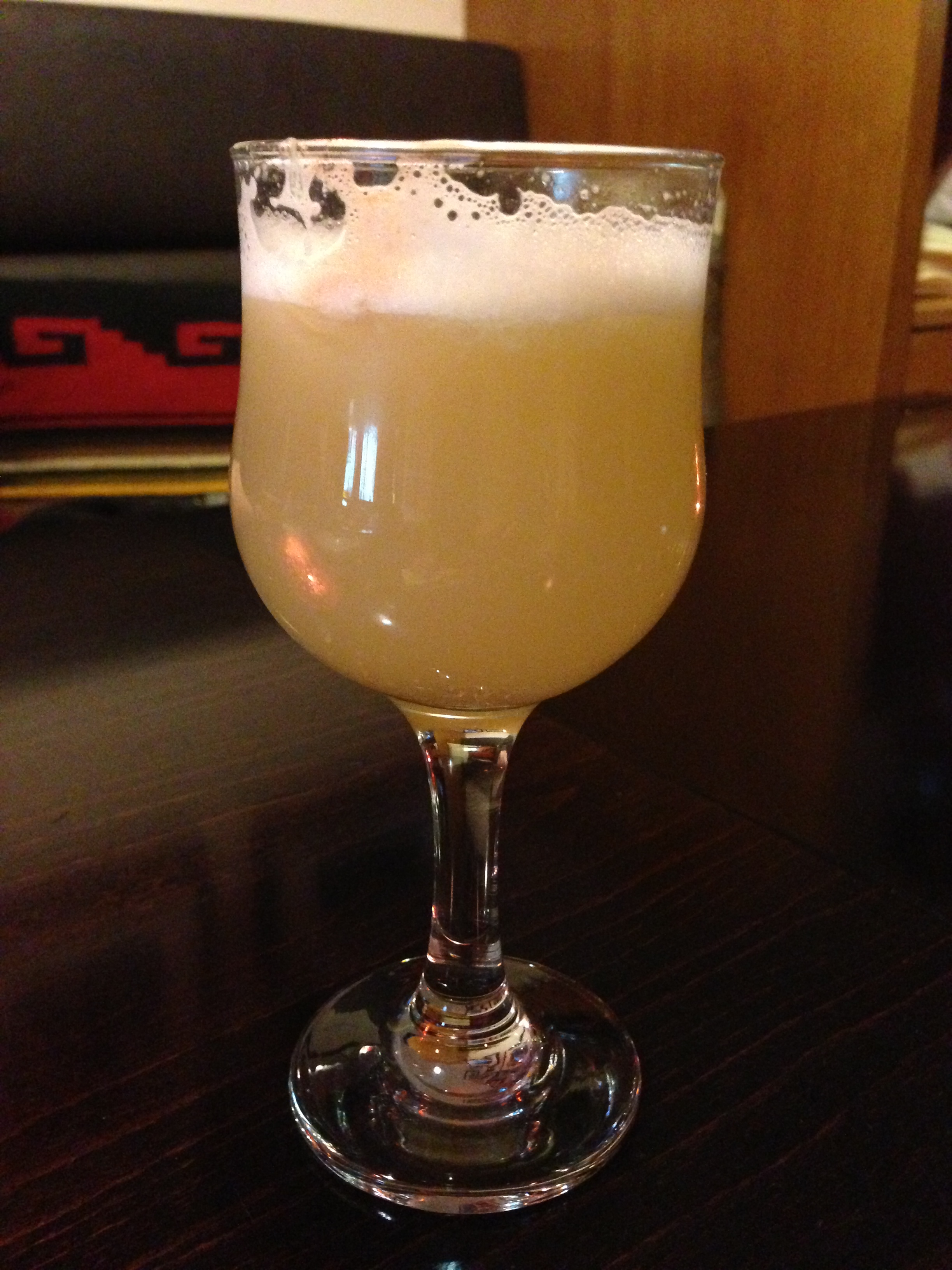 We opted for a couple of expertly made pisco sours to start. Pisco is the traditional Peruvian  liquer, and Tierra Peru also serve a number of other cocktails with this as an ingredient. Pleasingly, they also serve the Inka Kola, the bubble gum-sweet and brightly coloured Peruvian soft drink – if you’ve never had the pleasure of some Inka Kola before, I’d recommend you give it a try…at least once! Diving straight into the mains, I opted for Carapulcra, a chicken, pork and potato stew served alongside some white rice. My dining companion went for the Chicharrones de Cerdo, deep fried pork with sweet potato and fried cassava. Whilst I definitely enjoyed my meal – although I felt the portion could have been a little larger, my companion was didn’t especially enjoy his dish – which was largely because he probably ordered the wrong thing rather than there being anything especially wrong with it. (So there’s a tip – make sure you really can handle some deep fried pork if you order.) 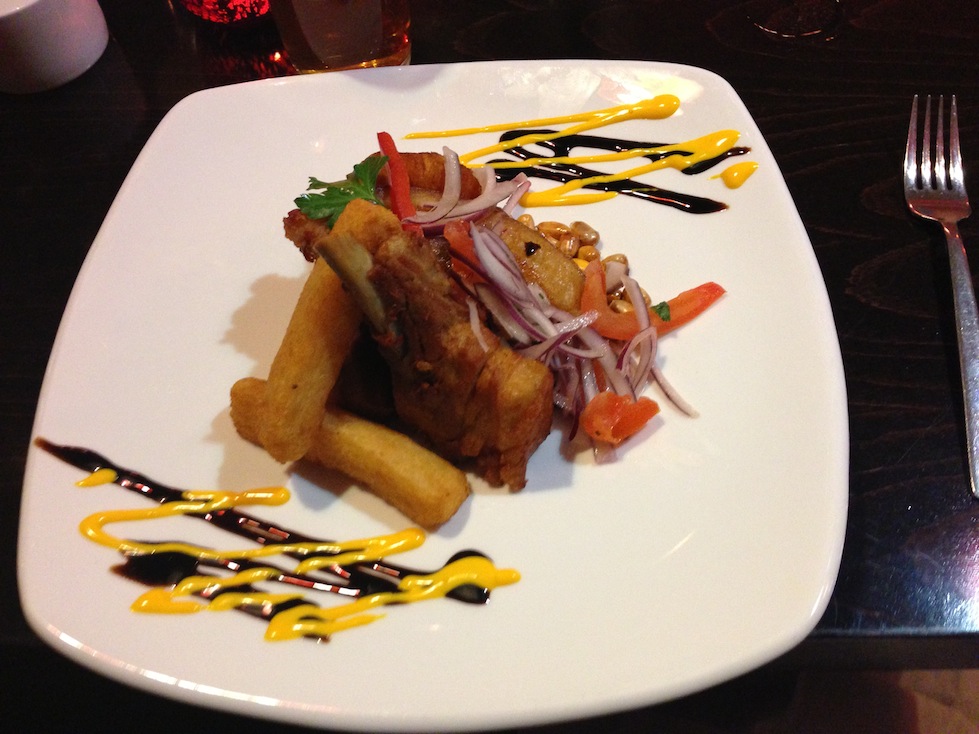 Initially going to decline on some dessert, we were tempted by the coca tea on the menu and the waitress’s claim that the Pie de Limon de la Casa – homemade lemon pie – was top notch. And it was, though this time quite on the large side! 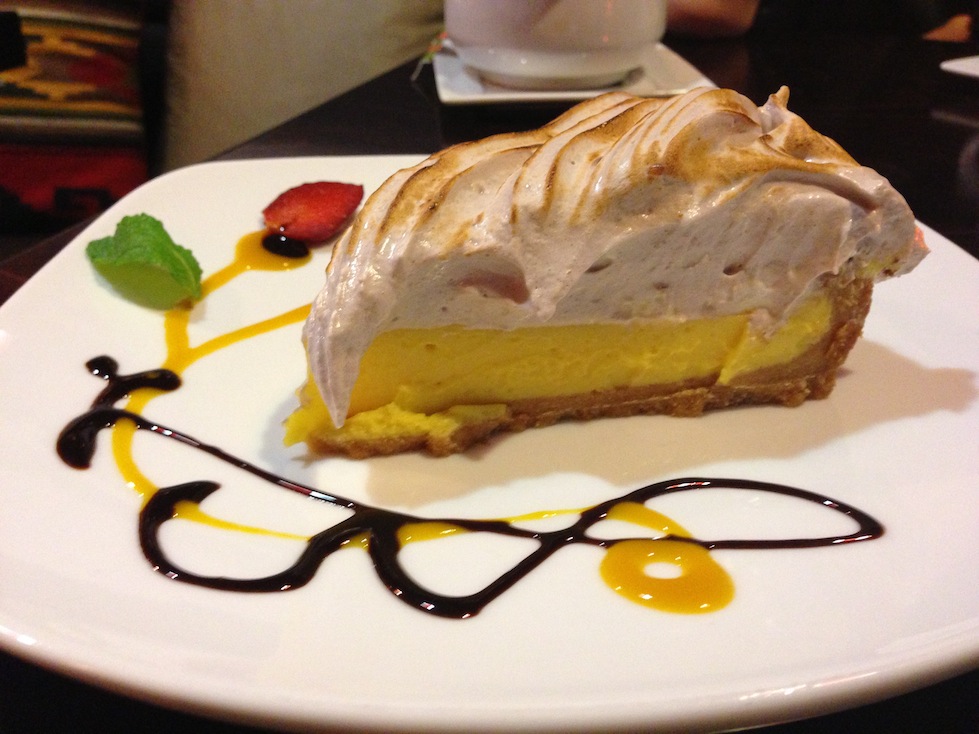 For two cocktails, two mains, a glass of wine and a beer, two hot teas and a dessert, our bill came to £60.10 not including tip. I wouldn’t regard this as being on the super budget side of things, but visiting Tierra Peru is definitely recommended for a very pleasant meal out.