Anyone who knows anything about anything knows that the Giraffe chain of restaurants are always a good option for a wallet-friendly meal. They’re also a pretty good choice when you’re not entirely sure what kind of cuisine you’re in the mood for – given that their menu spans the globe…almost. (Well, it does burgers, enchiladas and quesadillas, and noodles…what else is there?) Oh and, they’re friendly and cheerful, and seem pretty decent places to eat out in if you have little people in tow. (I mean kids. What did you think I meant?) 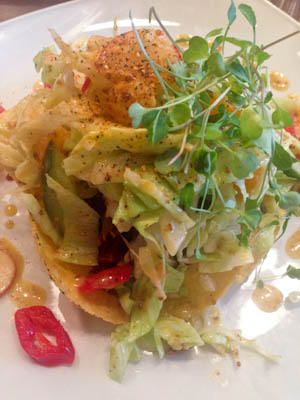 When I first came across a Giraffe cafe in Hampstead that looked ever-so-slightly-but-not-quite like the Giraffe restaurants I couldn’t believe this place had ripped them off – or was it the other way around? Turns out no outrage was necessary, as this was merely the very first ever Giraffe ever, so probably kept its authentic “first of the chain” look.

This location has now turned into G1, which is their only training restaurant – both in terms of them being able to try out new dishes, but also in terms of training up staff. For this terrible inconvenience (nooooot! – hello, Wayne’s World!), customers are faced with lower prices. And the opportunity to try out something new, I guess.

The actual location is pretty small, especially in comparison to most large and airy Giraffe restaurants. There’s just a few tables, a few long, sharing tables and benches and a counter and stools as well as some outdoor tables too, for that essential “posing in the Hampstead sunshine” experience. It’s also – how shall we say – more trendily fitted out, with a far more muted colour scheme that you’d might normally recognise.

There’s by and large a rather simple pricing structure in operation here – £3.75 for starters; £3.95 for desserts, and £6.95 for mains. Bargainous, or what?! Even drinks are cheap and cheerful – although limited in choice, a bottle of beer is under £3 (are we really in London??) and glasses of wine are less than £4. The cheapest bottle of wine is but £10!

The actual menu is perhaps less ‘adventurous’ than one might expect from a training cafe, and there’s plenty of dishes you might recognise from regular Giraffe restaurants, although there’s also specials too. We opted for a duck tostada to share as a starter, which turned out to be a great sharing option even though it wasn’t under that section on the menu. Small and juicy pieces of duck in amongst a salad of shreds of lettuce, cucumber, radishes and chilli, with a zesty dressing – all on a tostada, of course. One of the funnest Mexican eating choices, I find. (It’s almost like a plate, but you can eat it!)

For mains we opted for the harissa chicken and what was touted as a Jambalaya risotto with aubergine and courgette. I don’t mind dipping into a bit of vegetarianism now and then, although I cracked upon being told chorizo could be included (at no extra cost) – I mean, COME ON! Chorizo?! Not even veggies can resist chorizo! (Note: Not a true fact.) 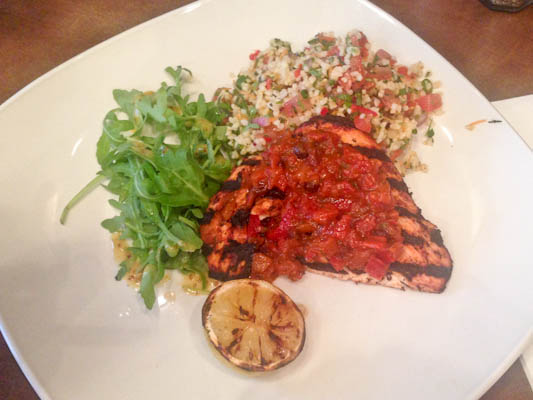 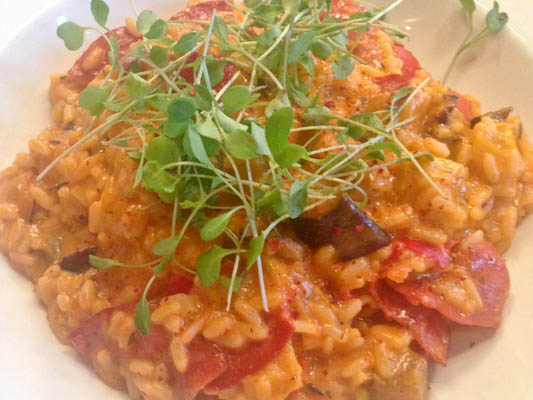 My risotto was deliciously filling – especially with the new addition of chorizo – and supremely creamy in texture. The harissa chicken was a little less exciting, garnering from the eater’s lack of enthusiasm, and perhaps not a meal that’s ready for prime time. I mean, ready for the main restaurants.

I could happily have tried out one of the ‘less than £4’ desserts, but I had to depart to a local, over-priced Hampstead pub to spend all the money I’d saved at the G1 cafe.

Go. Go now to G1. It’s very tasty and friendly and nice and a steal. Really.