You are here: Home > London Transport > Cycling in London

If you have access to a bike whilst you’re visiting London, then that’s obviously a very cheap and relatively easy way of getting around small sections of the city. For the more adventurous amongst you, you may even bike your way across London. (Though we wouldn’t necessarily recommend it, as you’ll have to know the city reasonably well in order to plan a good route and know where you’re going!) Cycling in London can also be a very enjoyable way of seeing the city – not to mention a healthy way too!

There are a number of cycle paths dotted around the city, however, although they’re not really all that widespread to be of particular use in actually getting across or through the city. Do check out the excellent website London Cycling Campaign which has some details of these lanes; they also have plenty of advice on cycling in London as well as details of events and meetups if you’d like to participate in that sort of thing.

First launched in summer 2010, there are now four cycle superhighways (with eight more to be launched by 2015) that run from the outskirts of London into central London. These “superhighways” have a painted blue 1.5 metre-wide path on the road to mark them out to other traffic, and the lanes also have information about the route, times, and so on. As mentioned, four routes currently exist (from Barking in east London to Tower Gateway (near Tower Hill); from Merton in south London to the City; from Wandsworth in southwest London to Westminster; from Ilford in east London to Aldgate). More on the Cycle Superhighways website.

Cycling in London with the Cycle Hire Scheme

Also launched in summer 2010, London now has its own cycle hire scheme similar to those in cities such as Paris and places in Germany. There are docking stations all over central London, so there’s plenty of opportunity to make short trips. Everyone must pay an access fee first (£2 for one day; £10 for 7 days or £90 for 1 year) and there’s then a usage charge on top, which ranges from free for up to 30 minutes (to encourage people to keep the bikes for only short periods of time), £1 for one hour up to £50 for the maximum time limit, 24 hours.

You take out as many bikes in one day as you like – for example, you could hire 5 bikes for five 25 minute periods within 24 hours and only get charged the £2 daily access fee. 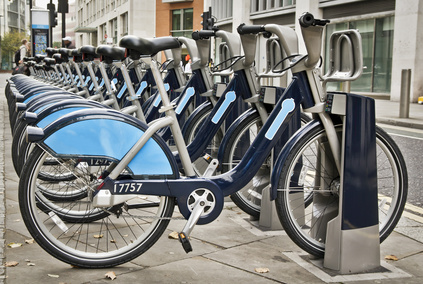 The area covered by the Cycle Hire Scheme has been extended over the years, and there are plans to further extend it into areas of southwest London.

All details about the scheme, including a map of docking stations (they’re absolutely everywhere – far too many to list here), can be found on TFL’s Barclays Cycle Hirewebsite.

Of course, many companies in London offered bike hire long before the cycle hire scheme came into existence. If you want a bike and want to do a bit more cycling than just 30-minute/1-hour bursts, it might be an idea to contact one of these companies who can assist with longer-term rental. Try Go Pedal, Action Bikes or On Your Bike, or Velorution if you want to hire a Brompton bike (those are the folding ones).

If perhaps you’re a little bit concerned about being let loose out into the big bad world that is London on a bike all by yourself, why not join an organised cycle tour? Both the London Bicycle Tour Company and London Cycle Tours offer tours in assorted locations and with different themes. These tours are a great way of sightseeing in London at a faster pace than walking!