You are here: Home > London Transport > Getting Around London by Bus

Getting Around London by Bus

Bus transport in London is cheaper than Underground travel, and the bus network is very extensive. There are a few drawbacks: being subjected to London traffic is one, as is trying to figure out what bus you need for where you’re going…and also, of course, trying to get off at the right stop instead of missing it and having to traipse back to your intended destination. But putting that all aside, it’s easy to get around London by bus and, in some cases, even better than using the Tube!

London Budget Tip: Bus travel is actually also a great, cheap way of doing some sightseeing. Hop on a bus in central London and climb up to the top deck, and you will have an excellent view of some of London’s attractions. It is cheaper than those sightseeing buses – and there’s no annoying commentary!

In central London, there is only one fare for bus travel: any journey costs either £1.40 with an Oyster card, or £2.40 as a cash fare. In the main parts of central London you will also find that you have to buy your bus ticket prior to your journey – there are ticket machines at bus stops for this purpose (if there isn’t a ticket machine at the bus stop, it means you can purchase your ticket on board the bus from the driver). 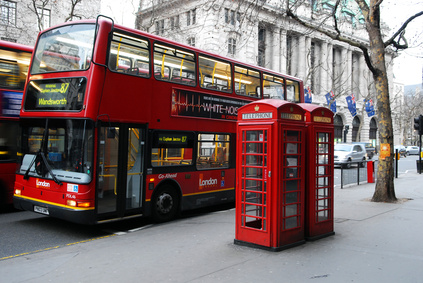 Most buses have a display indicator showing the name of each stop as it approaches – you’ll also probably hear a voice announcing the name of the stop too. If you’re worried about missing your stop, you can also ask the bus driver to help you – most are pretty friendly (though, of course, if it’s rush hour and there’s crowds, they may be busy) and will let you know when you’ve reached the place you’re intending to get off at.

Getting around London by bus at night

You will also find buses an invaluable mode of transport in the early hours of the morning when the Underground has stopped operating and taxis are unavailable or too pricey. Night buses start at about 11pm/midnight and run until approximately 6am, with often only about one bus an hour, although they’re more frequent on Fridays and Saturdays (perhaps four buses an hour, depending on the route). Night buses have an ‘N’ prefix in front of their number, indicating that they are the night version; some night buses don’t have an ‘N’ prefix but are labelled as “24-hour” instead, so run all night too. (Slightly confusing, eh?) Not all bus routes have a night version, so check before you go out that there is a bus home.

Once again, the Transport for London website is an invaluable resource for bus travel planning – you can look up routes, bus maps, journey times and so on.