You are here: Home > Review: Digital Revolution Exhibition at The Barbican Centre

By Anna on August 6, 2014 in Central London, Entertainment, Exhibitions, Reviews

The exhibition is split into three sections – the first a kind of walk-through past and present display of tech and how it can be used. Part two is a small blue cage (no, literally) with sixteen computers showcasing a variety of games for attendees to have a go on. And part three involves LASERS! 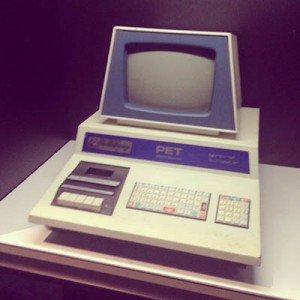 The Commodore PET, one of the world’d first home computers 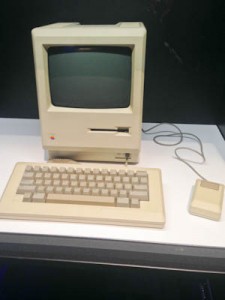 Who remembers these? (I do!)

If you have even the slightest interest in tech and have ever been near a computer in your life, you can’t help but walk through the first part of the exhibition going, “Ooh, I used to play this! Oh hey, I had one of these!” There’s Game Boys, Breakout, a Pacman arcade machine, Nintendo Game & Watch devices and plenty of other stuff that didn’t come out in the 1980s. All of these items are interactive, so grab a go on a machine if you can. There’s giant screens up high running an endless loop of videos explaining the use of computers in things like films and music videos – it’ll come as no surprise that snippets of Money For Nothing blare out frequently. 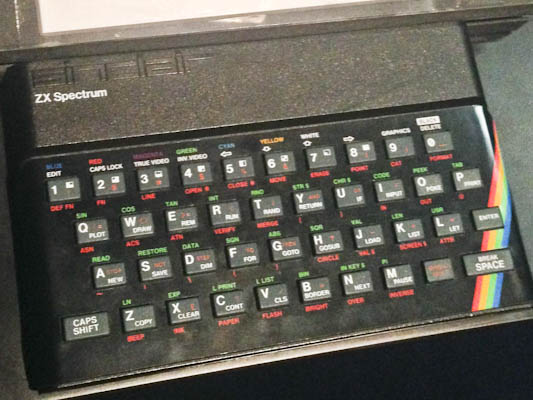 There’s more large video installations explaining the use of computer generated graphics in films such as Gravity and Inception, as well as the displays of Internet-based projects, such as Dronestagram. But it’s past all this into the specially-commissioned art pieces that are the core of the exhibition which, much like the start of it, are largely fun games but more interactively so. From whispering a word into a microphone to see it displayed on a screen and turned into a butterfly, to seeing yourself on a large video projected onto a wall with the addition of wings – or being eaten by birds. Will.I.Am features (of course he does) in his own special room; a large vision of his face on the wall in Egyptian headgear, singing along to a new track above ‘instruments’ in the room. Try and get around the room without his eyes following you. (Spoiler alert: you can’t.) 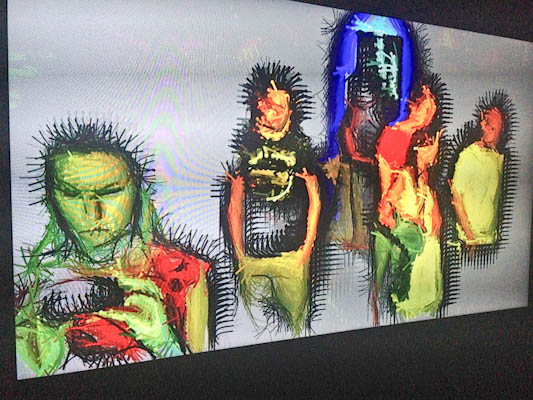 Post playing computer games in a blue cage (or waiting patiently for a space to be able to play a computer game for a few minutes), it’s down, down, down into the pit of the Barbican Centre – literally, for the last part of the exhibition – Umbrellium – is located in the Pit Theatre. I don’t particularly want to spoil the surprise of what’s in there, but “fun with lasers in a way you don’t expect” would be an apt description. Go and see for yourself!

The Digital Revolution exhibition costs £12.50 (concession/student/young person tickets also available) and I’d say it’s definitely worth the price for a fascinating look at technology old and new, and the rather amazing things that it can be used for – that these days, we often don’t bat an eyelid at. My one bit of advice would be to go early on a weekday if you can – the exhibition must be all that more enjoyable when it’s not overly crowded.