Ramen ramen ramen. Ramen? Ramen! At the start of my last restaurant review, I made some sort of joke about every single new restaurant in London being a ‘burger joint’. And until they invent a burger made from ramen noodles (oh wait…they already have!) we’ll just have to make do with regular ramen in steaming hot bowls of soup.

Having grown up on chicken noodle soup – hey, I’m from an Eastern European background – I absolutely adore soupy noodles and noodle-y soup. I can’t quite remember my first time I ever had ramen soup, but I’m sure I must have burst into song and come up with an impromptu dance routine that culminated in jazz hands.

Aside from a jet-lagged Korean cold-noodle soup debacle in New York once upon a time, I have never not enjoyed noodles and soup. That’s a fact.

So guess what? Off I went to try and to review Tokotsu in Soho a few days ago. This has been on my two do list for a while – along with 91 other fine London venues (true story) – and I’d in fact passed it on my way to Herman Ze German on Old Compton Street. At the time – of course – I had thought “Oooh, noodles? Now…? Instead of currywurst?” but had seen how utterly rammed the venue was and decided to make do another time.

Thankfully, that other time rolled around. We arrived just after 7.30pm to find the small downstairs floor – with tables and counter seating – rather full, but were shown upstairs instead. We’d clearly got there just in time, as the only other empty tables upstairs filled up about 2.7 seconds after we arrived. (There’s a no reservation policy here. But there’s no reservation policy anywhere anymore and never will be.)

All around us, diners were heartily tucking into starters of gyoza (dumplings) which should have told us something. We decided to ignore the gyoza-fest (hey – great name for a restaurant!) and opt for the ‘Salt & Sansho Pepper Squid’. One can never go wrong with salt and pepper squid, can one? Well, presumably one can, but not if one is at Tonkotsu. These little pieces of squid – with a healthy covering of sansho pepper which provides a lemon-y tang – disappeared before we’d even though about adding some chilli oil to the side. Oops. 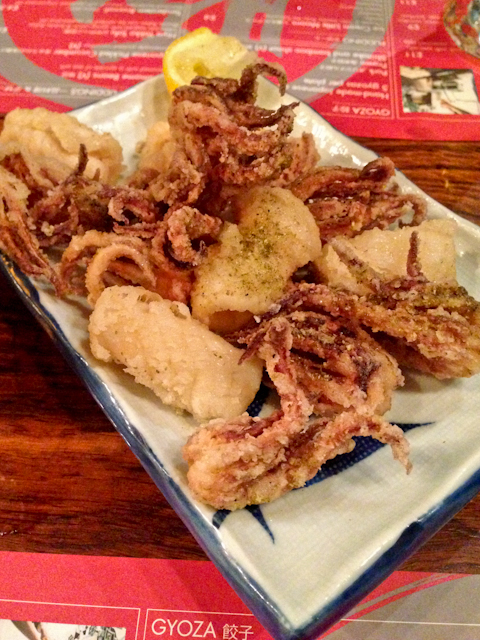 For mains, we chose the Tonkotsu and Tokyo Ramen bowls, both of which came with slices of pork belly but the former in a sea-salt based pork stock with thin noodles, the latter in a soy sauce based pork and chicken stock with medium thick noodles. And both came with a delicious half of a soft-boiled egg, spring onions, bean sprouts and menma. Yes, I did just have to look up that last thing. And yes, I now know the proper name for those brown squidgy pieces that always appear in ramen. On each table, various condiments are laid out – a pot of chilli oil, soy sauce, mirin (I believe) and even a garlic bulb and crusher – so you can adjust your ramen to your own taste. 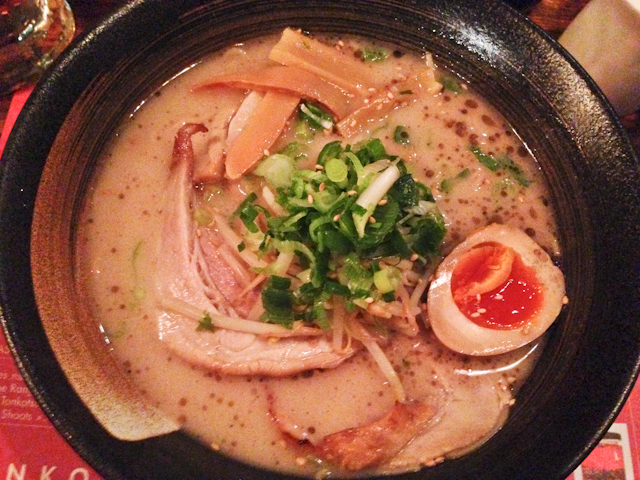 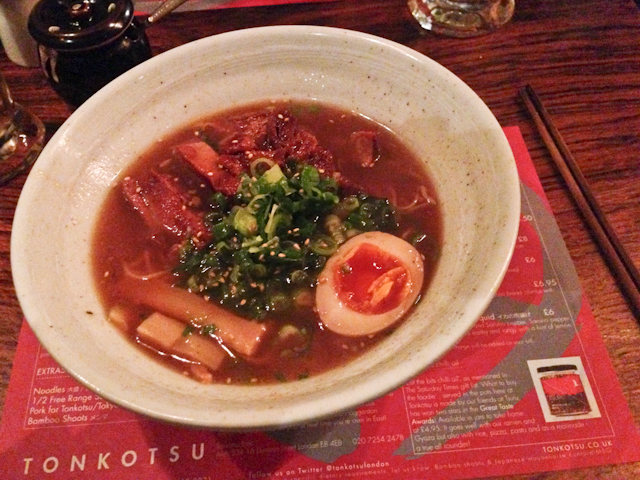 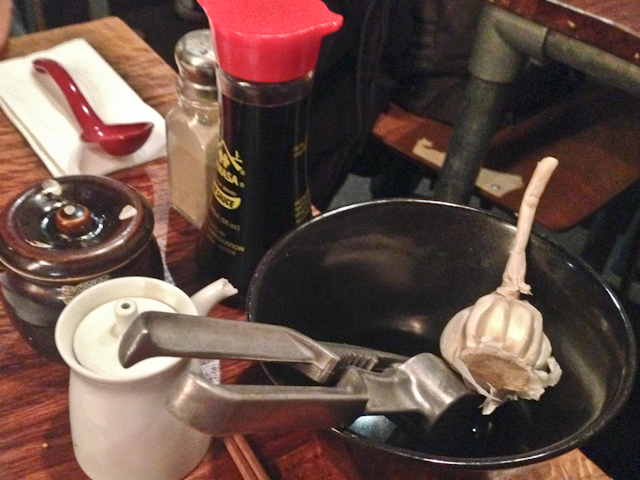 Construct your own meal (no, not really!)

Slurp away we did, heartily tucking into and making a mess of eating the noodles. Well, when in a ramen restaurant… I actually ended up preferring my companion’s soup stock (the non-sea-salt one), and the pieces of pork belly that came with that, although that’s entirely personal choice; there was not much to distinguish between the two bowls in terms of flavour. With an accompaniment of a pint of Asahi – reasonably priced for London – this dinner certainly was fabulously comforting and ridiculously filling. The only way the restaurant could improve would be to install little beds for a post-ramen snooze.

Price-wise, Tonkotsku is also pretty good value. The ramen options cost either £9 or £11, and most sides and starters (with almost all very suitable for sharing) average at about £6. So it’s easy to get a super-warming and outrageously filling meal, with a drink, for around £20 per person. Or you could just option for a ramen bowl for around £10!