You are here: Home > Areas of London: Visiting Marylebone

For the second in our series of posts on visiting areas of London, we decided on visiting Marylebone. Marylebone’s a very fine area of central London indeed – somewhat up-market, in fact, although there’s still plenty of budget-friendly options around. And if you’re in to burgers – well, then – you’re in luck. This bit of London (rather randomly, it would seem) is home to some of the finest burger “joints” the capital as seen. (So far, that is. New ones pop up all the time.)

Marylebone roughly stretches from Marylebone Road (the clue’s in the name) down to Oxford Street, although for the purposes of this visit we’re concentrating on Marylebone High Street and the little streets off it.

Baker Street station lies at the top of Marylebone, so it’s the best place to disembark if you’re heading to the area by Underground. Marylebone station is actually a little bit further away, and only serviced by the Bakerloo line – so isn’t the best station to use, despite its name! There’s also many buses that trundle down Marylebone Road, so check on Transport of London‘s website to see if there’s any buses you can make use of. 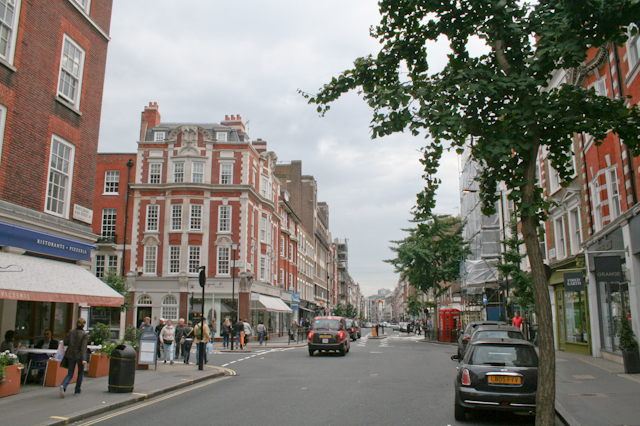 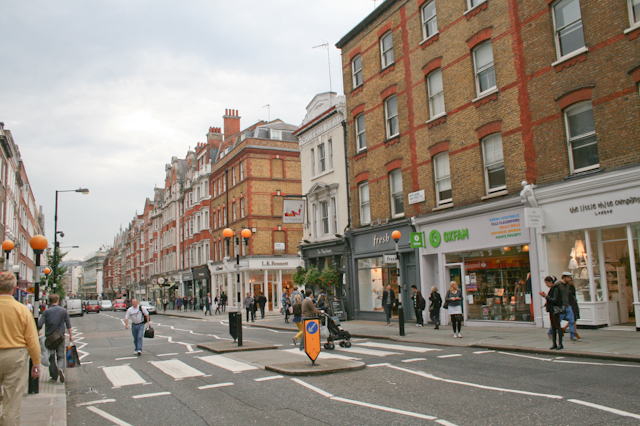 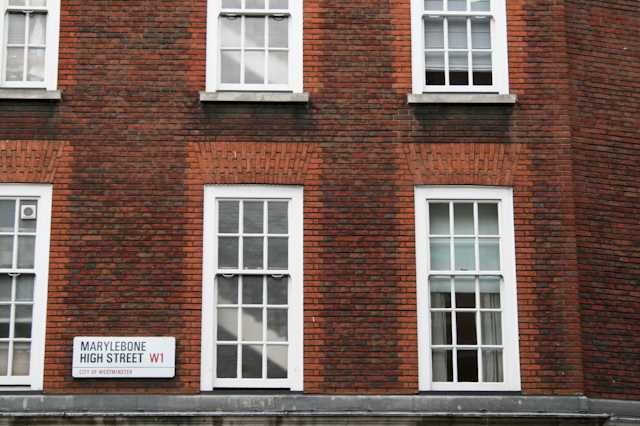 Right at the top of Marylebone High Street lies St Marylebone Parish Church (the front of which lies directly on Marylebone Road) – take a moment to take in this fine, early-19th century structure. Its side gardens are certainly a pleasant location for an afternoon rest – but seeing as we’ve just started exploring the area, now’s not the time for a sit-down. However, on Saturdays, the gardens host the wonderfully named Cabbages and Frocks street market. Largely fashion based, you’ll find a number of stalls selling second hand designer goods (hello handbags!), start-up designers and independent clothing retailers, as well as a number of jewellery stalls. Food very often makes an appearance as well (you won’t be able to resist the macaron stall!), and different weeks of the market often have special themes and events too. 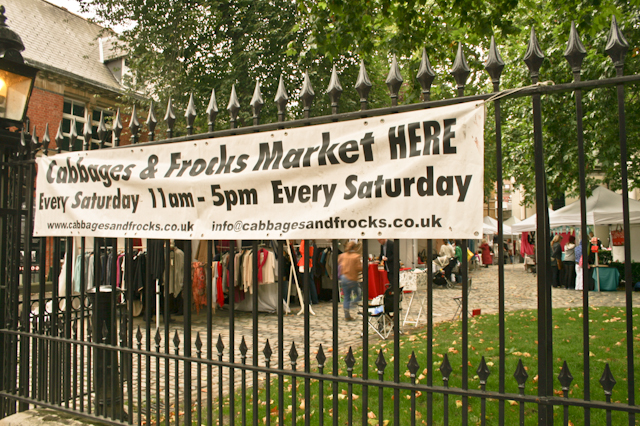 Heading further down Marylebone High Street – past a divine-looking Conran shop – you’ll start to come across the high street proper. Here’s where the boutique-y little shops, cafes and restaurants start. Right here is the rather fine pub The Prince Regent; with its “luxury Victorian parlour” feel, it’s a rather cool place to spend an evening. Opposite is a lovely corner location of Le Pain Quotiden that will have patrons practically spilling out the door if you’re visiting Marylebone on a weekend. A few doors down is The Natural Kitchen – if ever a piece of Manhattan transported itself over to the streets of London, this is it. The cafe-cum-restaurant-cum-deli is equal parts amazing and equal parts scary because of the “artisan” nature of it all…not to mention pricey! But worth a peruse. Cafe Momo next door is another good choice for food and drinks for those that like their pubs a little more chic and wine bar-y. 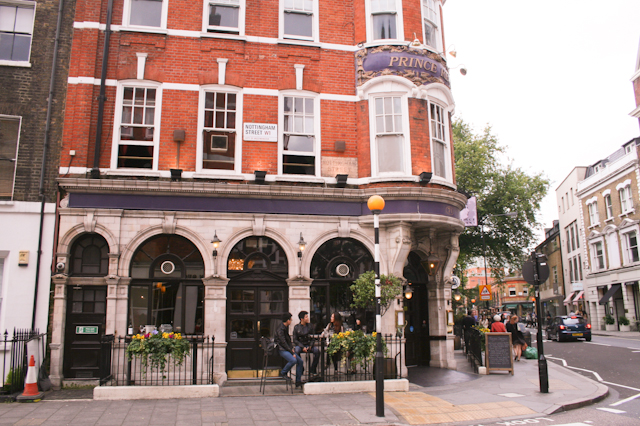 By now you’ll have encountered your second triangular pedestrian crossing that this road seems to like using. These would be quirky if they weren’t just so useless.

Daunt Books, on your right, is one location of one of London’s best independent bookshops. This particular branch is well worth visiting for its wonderful interior; it was built as a bookshop in Edwardian times. Divertimenti, almost opposite, is a superb kitchen store; in amongst the more expensive items (there’s an AGA section at the back) there’s plenty of cute little kitchen gadgets that you never knew you needed. Once more back across the street is Fishworks – a really excellent restaurant that couldn’t be a more perfect place to come if you or any of your chums are big fish fans. Decently priced too. Just next door is an Oxfam charity shop, with this particular branch largely devoted to selling second-hand books, CDs and DVDs (although there’s also some clothes and accessories!). If by this point you’re a little parched, stop off at The Marylebone for some cocktails – they’re 2-4-1 on the weekend before 8pm, or Monday to Friday from 8pm to 9pm. 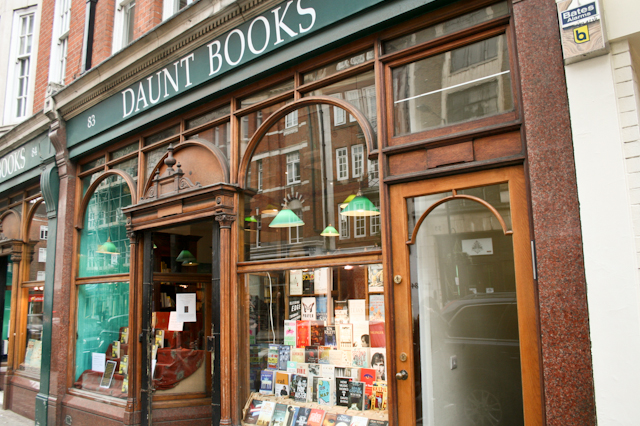 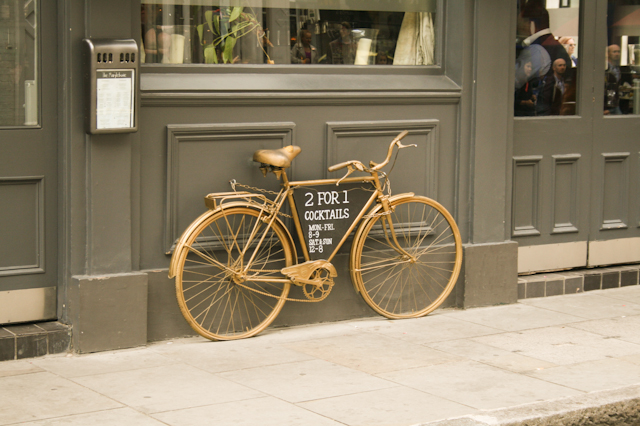 2 for 1 cocktails at The Marylebone

Round the corner from The Marylebone, on Moxon Street, are three exquisite specialists shops: La Fromagerie – for all your cheese needs (there’s also a tasting cafe on site); butcher The Ginger Pig; and Rococo Chocolates. None of these exactly come cheap, and first probably won’t be much use to any short term visitors to London, but you can still marvel at the quality of items on offer by gazing through the shop windows. Just a little further you’ll see a large, open air car park – on Sundays, it’s home to Marylebone Farmers’ Market. 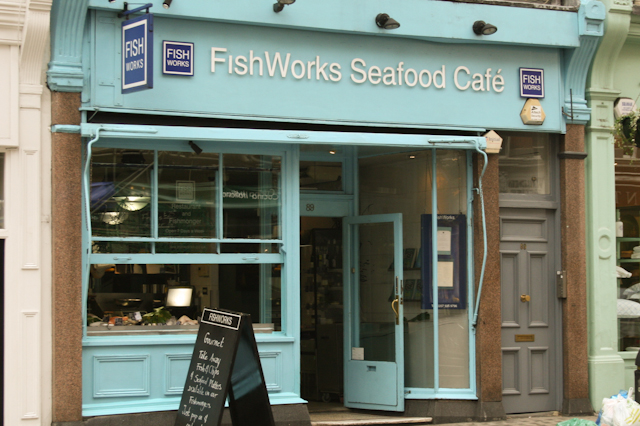 Back, then, to Marylebone High Street to continue the journey south. You’ll pass the acclaimed Providores restaurant – although the main part of this venue is rather pricey, take a look at the downstairs Tapa Room (no reservations possible) for some cheaper options, especially for breakfast or brunch. 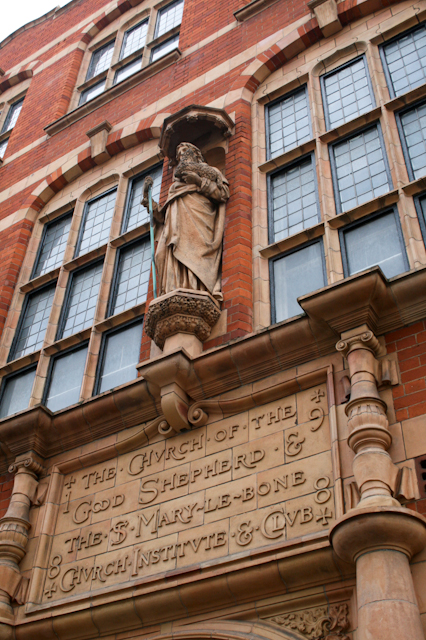 The Church of the Good Shepherd, on Paddington Street

Now – coffee and pastries or burgers? That’s your choice at this point in the tour! If you’re craving the former, head down the next turn on the left, New Cavendish Street, to the Nordic Bakery. Looking like a graphic designer’s dream from the outside, inside it’s all a little stark and gloomy, and you’re left wondering whether they’ve forgotten to install half the lighting. But they serve generously sized filter coffee (and other hot and cold drink options) as well as their styling of traditional Finnish cinnamon buns. Or, for something a little different, try a slice of Tosca cake (sponge, almond and caramel) or a Finnish yoghurt bun.

If it’s burgers you’re after, try Tommi’s Burger Joint on Thayer Street, the continuation of Marylebone High Street. This small restaurant has a simple menu (like any other trendy burger place these days), although is usually packed to the rafters, and for less than £10 you can get a burger, fries and a soda. (It’s hard to decipher these days whether that’s actually good value for burger and chips!) For a burger alternative (or double whammy?), try Patty & Bun further down the road for those who like their burgers a little more “speciality”. And then, of course, there’s also MEATLiquor a few streets east on Welbeck Street if you really haven’t quite had enough meat for one day.

Eating and Drinking in Marylebone