You are here: Home > Stage Eight of the Tour of Britain in London

Stage Eight of the Tour of Britain in London

The tenth Tour of Britain concluded on the streets of London yesterday – or round the streets of Westminster, to be precise. This was another one of those events that reaffirms my belief that London is one of the greatest cities in the world – a top class sporting event, featuring top class athletes, right on our doorstep…for free! (Lets gloss over the fact that the road closures must have meant a fair bit of congestion in Central London yesterday. But who really needs to drive through there on a Sunday?!)

After a weekend of mostly failing to attend Open House events (how naive was I to think that I could actually turn up within the opening houses of Battersea Power Station’s open house event and get in…), it was time to attend something in London over the weekend and actually see something and be excited by it. I half expected that my choice of heading to Westminster Underground station – very close to the stage’s start/finish line – would be a failure along the Open House lines. It turn out that the crowds weren’t that deep, and it wasn’t long before I managed to find a spot right at the front of the barriers.

In fact, just as I turned up, the peloton whizzed by – not a bad time to turn up. (Yes, it was mid-race. I appreciate turning up before they started would have been a better time to turn up.) The atmosphere amongst the spectators was fantastic, with a great number clearly having cycled to the event, and many – young and old! – wearing team colours. (Although I spotted one Team Sky-bedecked toddler zonked out in his pushchair. It was clearly a little much for some.)

I’d positioned myself out of range of the large screen on Whitehall, where I presume there was commentary on the live action. As such, I had to make do with a text action rundown from a sports website on my phone, although picked up much of what the pro-cycling enthusiasts around me were saying. (When they weren’t shouting about the Man City – Man United score, that is. 4-1, eh?) The bongs of Bing Ben high above us added to the superb London setting, and the excitement and shouts and cheers grew each time the cyclists went by.

Post-race, the cyclists made there way back around the circuit slowly, some going in the wrong direction. Some stopped to talk to someone in the crowd, some cycled past slowly doling out high fives and all competitors were applauded as they went by. One cyclist handed his water bottle to a rapt spectator, whose reaction suggested that he was absolutely thrilled by this unexpected gift…and then perhaps a little weirded out by a used water bottle from a sweaty cyclist.

We headed over to Whitehall itself to watch assorted presentations – stage winner, young cyclist, king of the mountains (mountains?) and so on – on the big screen there. It’s no surprise that a massive cheer went up for Mark Cavendish, the stage winner, and Sir Bradley Wiggins, overall Tour of Britain winner, when they received their trophys.

My only complaint was the near-infinitely looping modern version (i.e not sung by David Bowie) of Heroes during the presentation. Let’s give that song a rest, now, shall we?

Here’s some photos from from the event. Yes, it was quite a grey day! 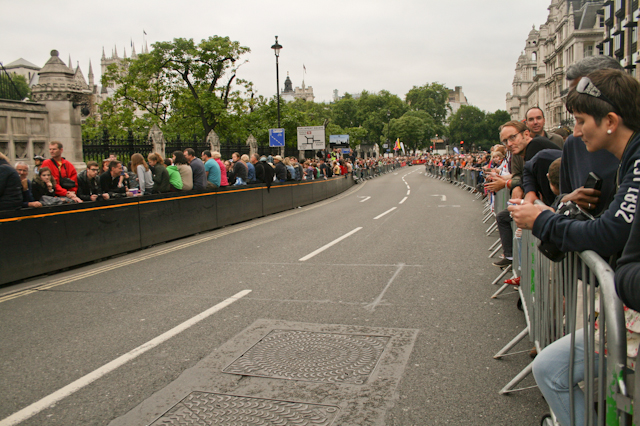 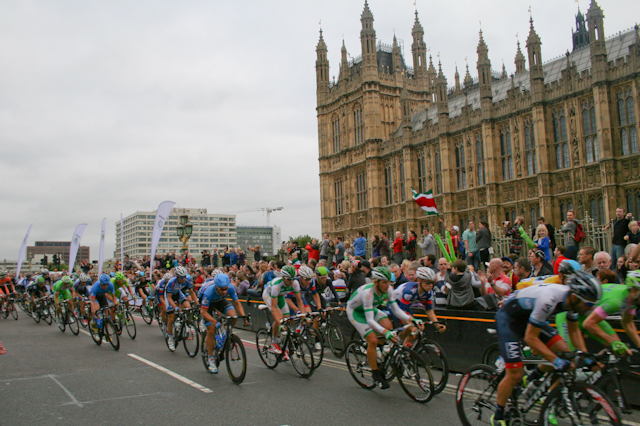 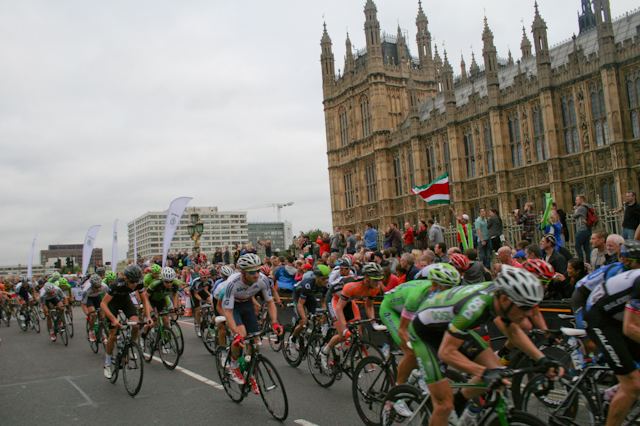 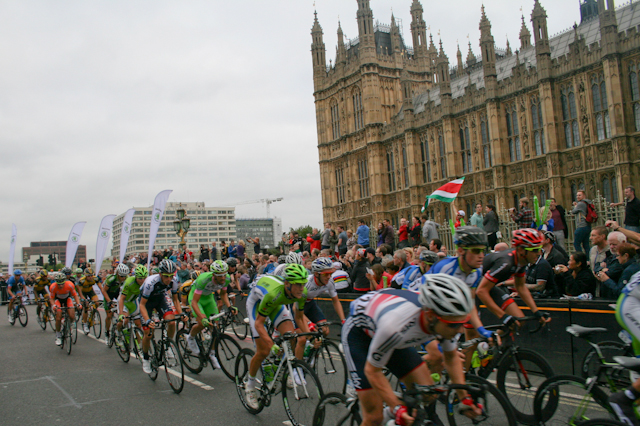 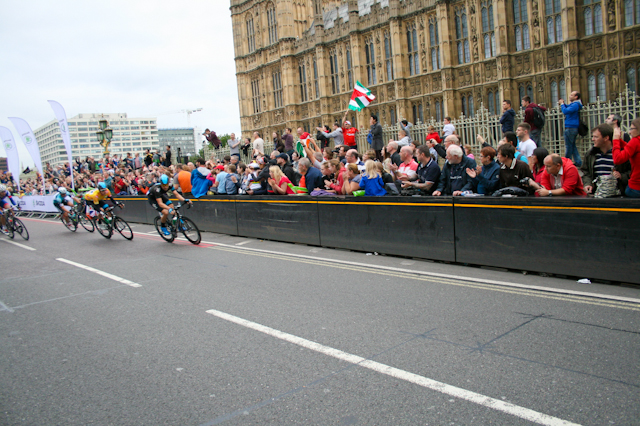 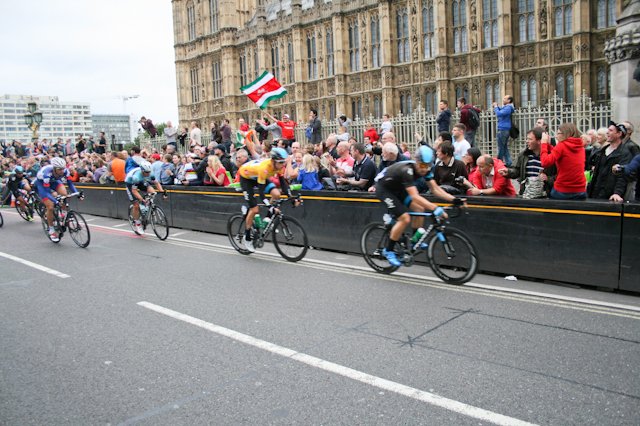 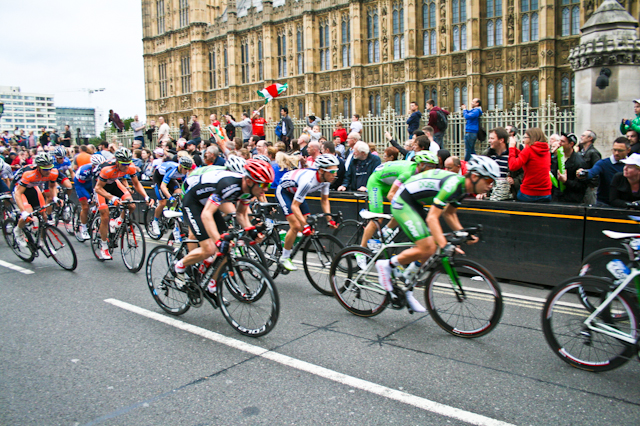 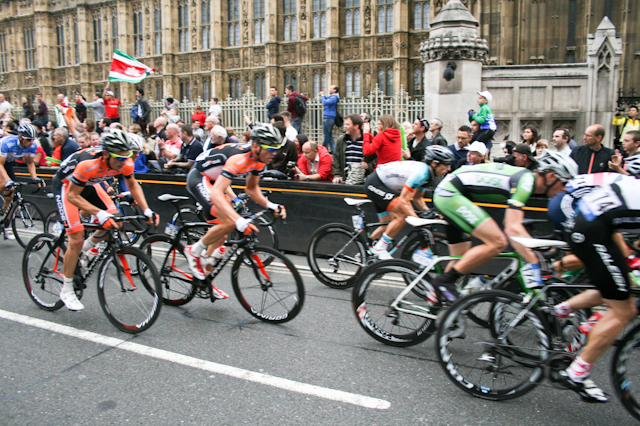 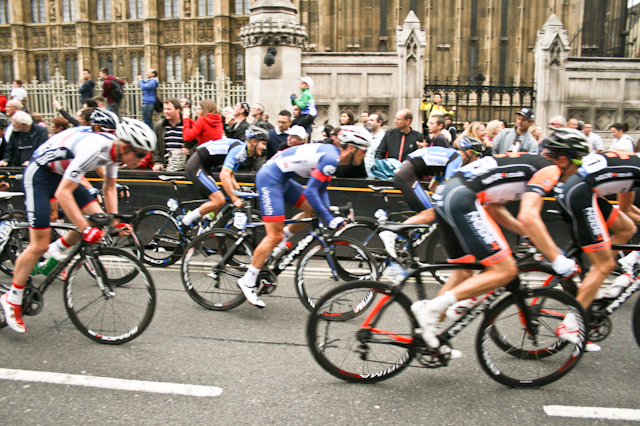 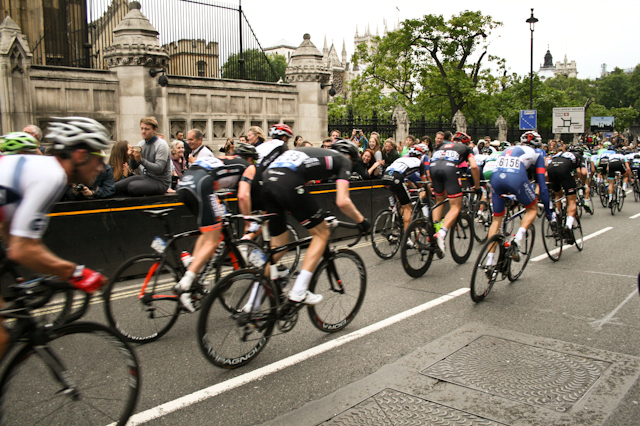 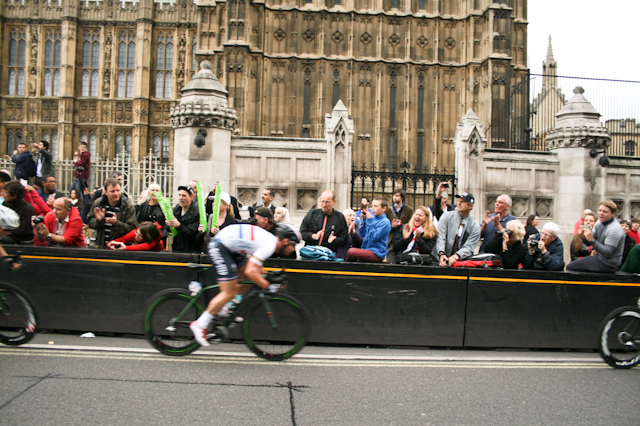