You are here: Home > A non-cyclist gives the Prudential RideLondon FreeCycle a go!

A non-cyclist gives the Prudential RideLondon FreeCycle a go!

This past weekend saw the capital’s many cyclists take over the streets of London – legitimately, and for a bit of fun and/or sport, depending on which event you were taking part in! (Note: obviously, not all the streets of London – that would be crazy. And, at the same time, rather cool. But quite a lot of the main streets were taken over, nevertheless.)

The Prudential RideLondon which took to the city’s streets saw various events take place on both days, including the London-Surrey 100 and the London-Surrey Classic on Sunday with participants taking part on routes similar to the road races at the 2012 Olympic Games. 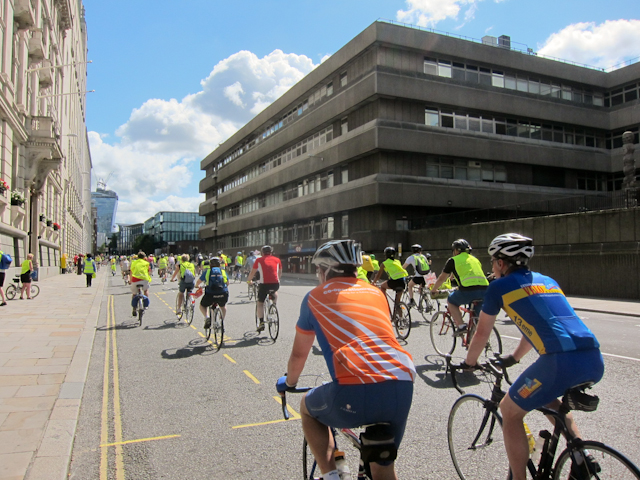 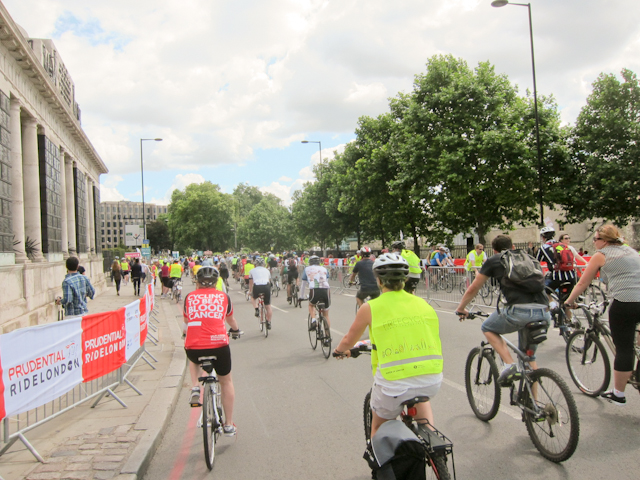 But on Saturday, the Prudential RideLondon FreeCycle was a far more leisurely (and shorter!) affair, however. Anyone with a bike – or a Boris Bike, if you were so inclined – was able to join an 8-mile route adjacent to the River Thames from Tower Hill to Westminster, up next to Green Park to Buckingham Palace and down The Mall, past Trafalgar Square and back to the Embankment. Not being much of a cyclist (i.e. not being a cyclist at all), it was this that I decided to join, as it seemed like it would be so much fun!

But…ahem, coming back to the aforementioned Boris Bikes… As I’ve mentioned, I’m not a cyclist at all. By that, I mean I rarely cycle more than a couple of times a year. It’s not that I don’t like cycling – in fact, I do – but living in central London means I can hardly go for leisurely bike rides, and I also don’t want to try stress-inducing bike rides through the traffic! For that reason, it may come as no surprise that I don’t own a bike, so had to “make do” with a Boris Bike for the FreeCycle. My cycling companion and I had been rather vary of trying to hire a bike close to the actual FreeCycle route (for they must all have already been taken, right?) so aimed to get bikes as close to it as possible, from a location that most others wouldn’t have thought of. We decided on Waterloo!

Zipping along the Embankment 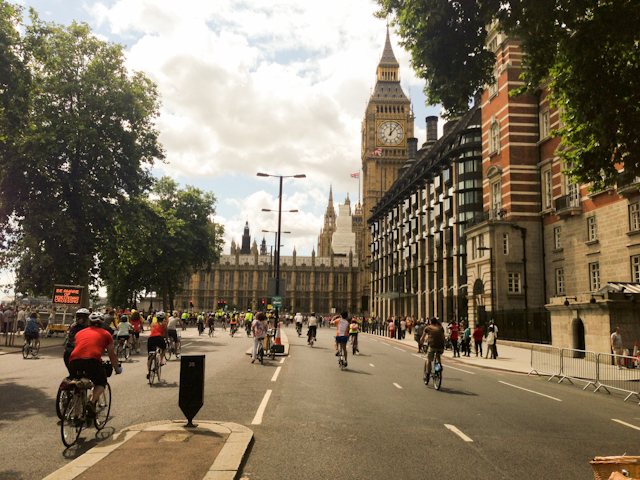 Picking up our bikes from the Boris Bike station, we cycled across Waterloo Bridge (eek, nervy – real traffic!) and reached the Strand, taking the first road down to Victoria Embankment where the cycle ride was taking place. And…in we jumped at just after 11am, joining the many cyclists that were already zipping down the street in an easterly direction.

And what did it feel like, cycling freely down some of the London’s main roads that would normally be utterly clogged with traffic? Fabulous! Whilst I appreciate I was probably experiencing much of what those that cycle frequently must do (barring not having any other vehicles on the road), it was rather liberating pedalling along, hearing the pretty chimes of people’s bells as the rung them for fun, shouting whilst going through the tunnels, nodding along whilst passing a sound system. Even that slightly uphill bit just before Tower Hill didn’t faze me. Much. Although I must admit that I still am feeling a bit saddle sore today. 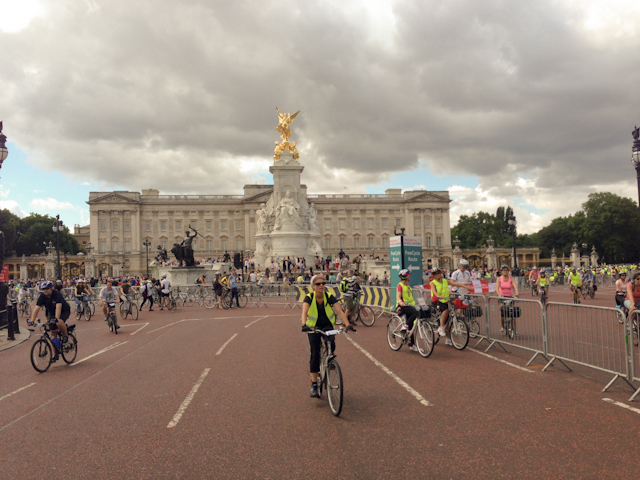 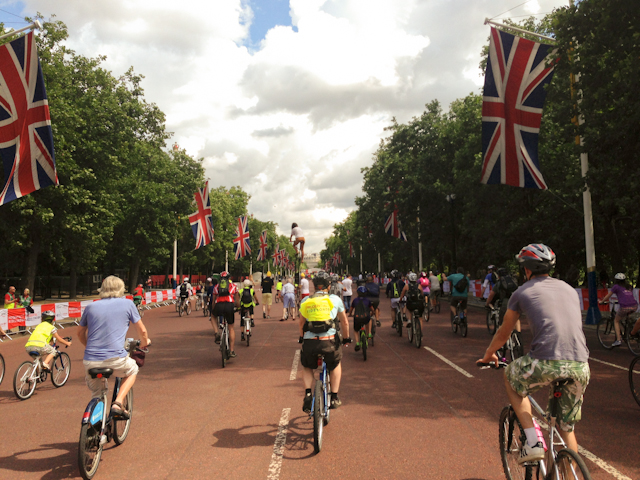 Down the mall – with the odd odd bike (look closely!) 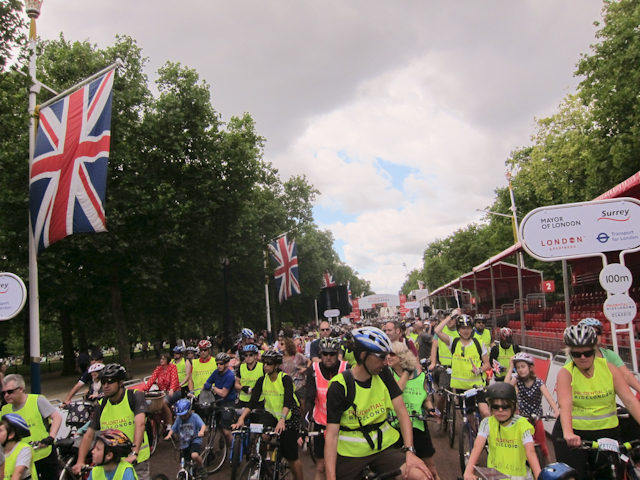 Stuck on The Mall!

A u-turning we went from this easterly end point, now in the wide lane taking us back west. Once again, largely cycling by the river, it was great to take in London’s landmarks – St Paul’s, the Millennium Bridge, the London Eye over the other side of the Thames – in this way. Reaching Westminster, we then turned up towards Green Park which is where a bit of a traffic jam (a cycle jam?) had started. Going past Buckingham Palace, we started down the Mall where the finish line for many of the weekend’s other events and races and been set up. Here, the jam became practically solid – partially for people stopping to pick up the free stuff (yay, free stuff!) and partially because some sort of incident had taken place, which the man on the PA system announced. When he wasn’t making bad jokes and telling us to wave at the camera, that is.

Past this, it barely took us any time at all to get back to our starting point, which coincidentally happened to have a Boris Bike station right there with only a few spaces for our bikes. It turns out that all the stations we saw, many right by the FreeCycle route had more than enough Boris Bikes. Equally, we didn’t see many Boris Bikes “taking part” in the FreeCycle – I’m estimate about 10% of riders were on one during the hour and a half that we took to cycle the 8-mile route. 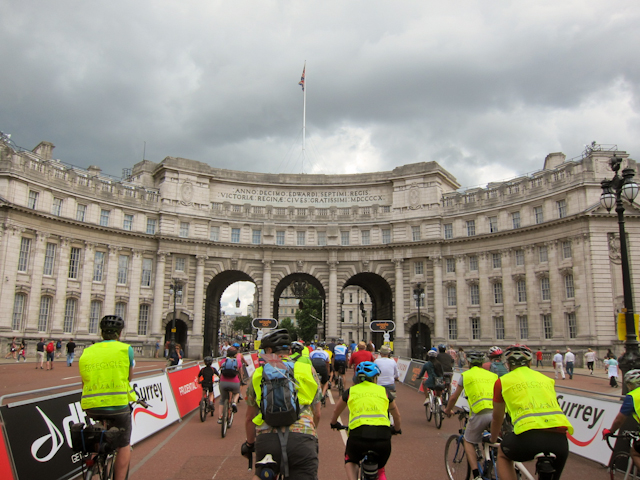 About to go through Admiralty Arch 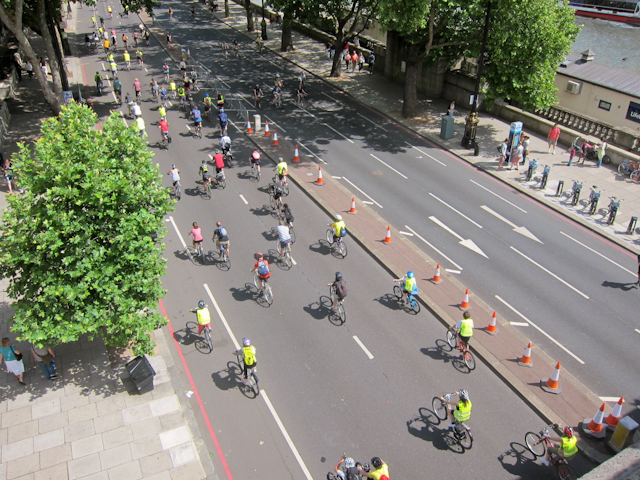 Post FreeCycle – looking down on other cyclists from Waterloo Bridge

I’d highly recommend this event. Sure, it was glorious weather on Saturday, but a bit of exercise, a whole lot of fun, and zipping down the streets in the centre of London – what’s not to like? It wasn’t quite free for us, given that we hired Boris Bikes (which cost a £2 day fee per bike, and £6 for up to two hours of rental each) but we obviously paid nothing to join in with the FreeCycle.

Can’t wait for next year!

More about the FreeCycle on the official site at www.prudentialridelondon.co.uk.