Is it worth it? Up at the O2 Review

By Anna on August 2, 2013 in Activity, Adventure, East London, Is it worth it?, Reviews, South London

Although it’s been open for just over a year, it is now that I come to write up my Up at the O2 review. Forgive me! But read on to see my thoughts and whether it’s worth giving Up at the O2 a go.

Up at the O2 is a guided walking experience that takes you up over the roof of The O2 in North Greenwich – the venue formerly known as the Millennium Dome (TVFKATMD, I suppose). You get to walk – in fact, kind of half-walk, half-climb – on a path that’s been built a few metres above the roof, before reaching the central viewing platform where you get some time to take in the view, pose for photos, chat to your mates. (Mates that are there. Not call your mates and chat to them. That’d be weird.) Then you get to walk down the path on opposite side of the roof – the whole experience (including safety briefing) taking about ninety minutes.

We timed our June climb for “sort of approaching sunset” time. This was less to do with any ideas of romance or for a nice view but more for the reasons of it being an appropriate time after work. Once we reached The O2 itself, there’s a little building beside the ticket office which now hosts all the Up at the O2 climbers. You’re asked to fill in a few forms (standard safety stuff for this kind of thing) whilst you wait for all the other participants to turn up – the maximum number, per session, is 15. We were then shown some kind of comedy video – at least, it was supposed to be comedy-based – making out that our climb would be some kind of adventure and expedition. Oh, how we laughed! (i.e. not at all)

We were then led into another room to jumpsuit it up and to get taught how to put on and use our safety harnesses. You of course leave all your personal belongings behind in lockers, but can take (and are actively encouraged to do so!) phones (no doubt encourage for tweeting/checking in/instagramming) with you. There’s pockets on the jumpsuit for that. Incidentally, I assume you can take a small camera with you too, although the idea of taking your smartphone with you was particularly underlined.

We emerged outside…but not to the O2 roof, yet. Instead we practise with our safety harness lines on a few makeshift guide rails – being watched by our climbing guides so they can see we can attach, walk with and then unattach the lines in a more-or-less smooth motion.

Finally! On to the roof. How disappointed was I to find that the walkway doesn’t actually start at ground level (or course not – but that would have felt kind of cool, right?) but about three “stories” up which you reach by climbing a staircase. You attach your safety line to the main guide rail, and walk up…basically. There’s two guide people – who walk on the other side of the path to us climbers (so they can easily reach anyone having problems) – who give out a few words of encouragement and instruction as we walk up.

To the summit! Or the main viewing platform, rather. In my post on the Emirates Air Line cable car I mentioned that, as cool as that was, there’s not that much of note to see in this part of London. A bit of The Thames. Canary Wharf. The Olympic Park, in the distance. It’s not exactly somewhere in central London for “fantastic London skyline” experiences. But it is still cool being up there, it has to said. There’s absolutely no denying that. (You’re free from the guide rail at this point, I should add.) 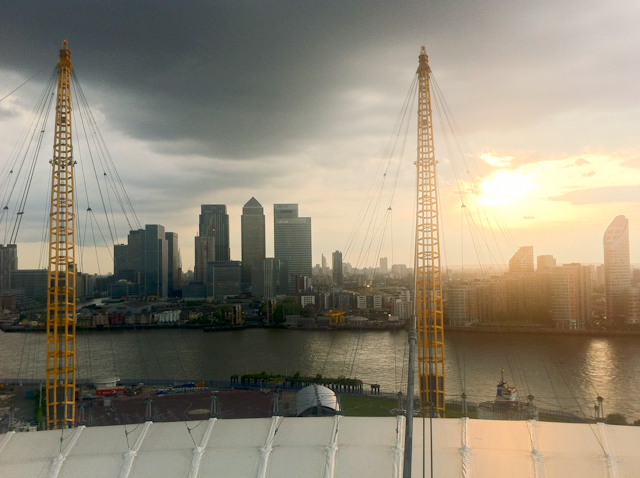 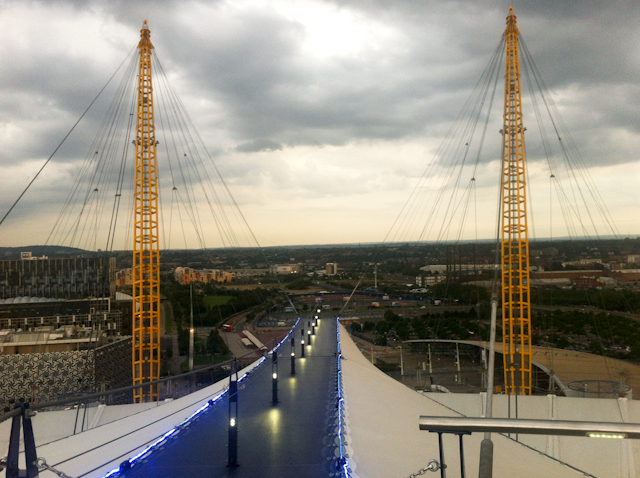 The walkway – yes it does look like it drops over the edge. It’s just the angle, I assure you. 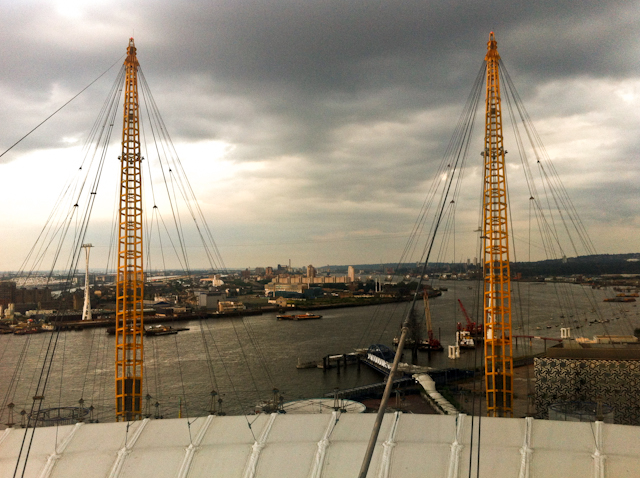 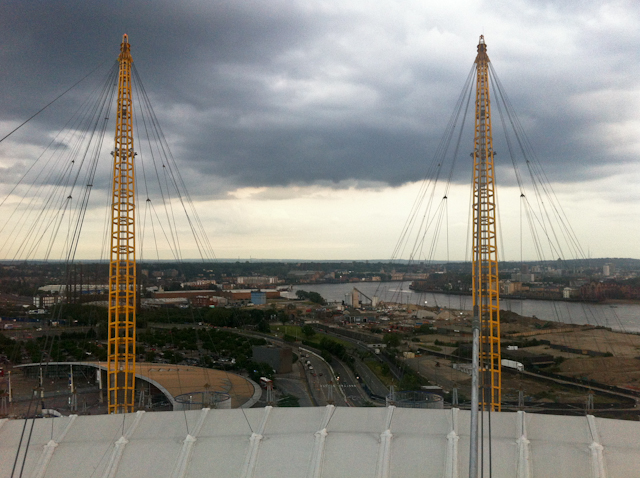 See what I mean when I say the views are less than exciting?! 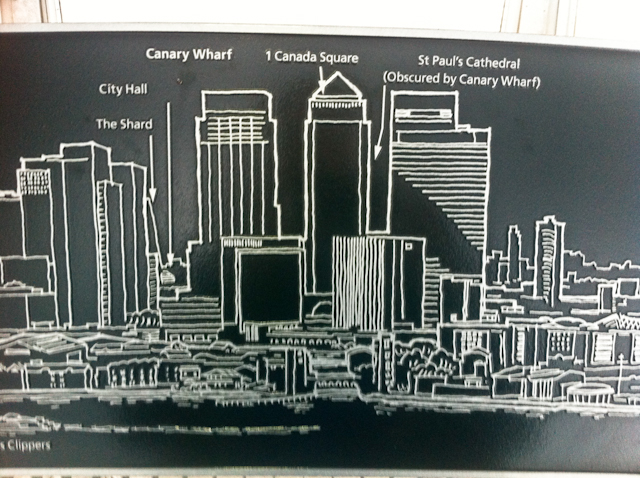 Information signs are dotted around the viewing platform, so you know what you’re looking at! 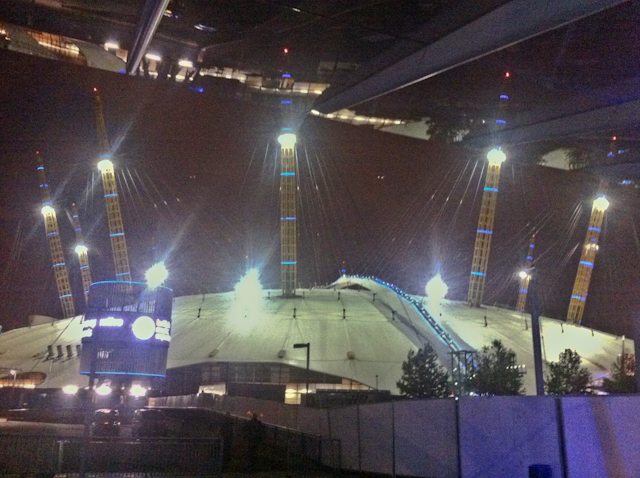 After about 20 minutes of being on the central platform, we’re told to reattach ourselves to the guide rail for the walk down on the other side. The walk down is a lot quicker, and easier too. Having had the experience of walking up, it’s not even that scary, despite the fact that you can now see downwards. It’s not long before we’re on ground level – this time the path does reach the floor – to get back to “base camp”.

It’s perhaps not the cheapest attraction in London, currently priced at £25 for an off peak climb, or £30 for peak times (sunset and twilight). However, for what it is, I’d certainly say that this is a good value activity for London. Not only do you get to “climb” up and over one of London’s more modern landmarks, but you also get to enjoy pretty decent views of the surrounding area. It’s also a quirky thing to be able to say that you’ve done – “Oh, you know, I climbed over the roof of the O2 today”. I personally don’t know anyone else that’s taken part in Up at the O2 (well, apart from my climbing companion), which makes me wonder how many people consider it for something to do in London!

London Budget Tip: If you’re a customer of The O2 mobile network, you should be able to get a money off code for buying tickets via their Priority Moments app.

Oh yes. See above. Give a go for something a little different in the capital.

Children over the age of ten can take part, so it’s “fun for all the family”. Even if you’re a little nervous with heights, as I am, it’s fine – because all you can see either side of the path you walk on is the roof of the Millennium Dome, a few metres below you, so you never get the sensation of how high up you really are. And of course you’re wearing a safety harness, so if you slip the worse thing you can do is fall on your bum. And perhaps look a little foolish.

If you’re absolutely terrified of heights, I assume this probably won’t be for you!

More on Up at the O2

For full details on Up at the O2 and to book tickets, please see www.theo2.co.uk/upattheo2.

Activity, Adventure, East London, Is it worth it?, Reviews, South London