You are here: Home > Areas of London: Visiting Brick Lane

But there’s of course plenty of reason to visit Brick Lane even if you’re not into either of these two…tasty…delights. Right on Shoreditch’s doorstep, there’s much to see, do, shop in and eat at for a exceedingly pleasant afternoon out. 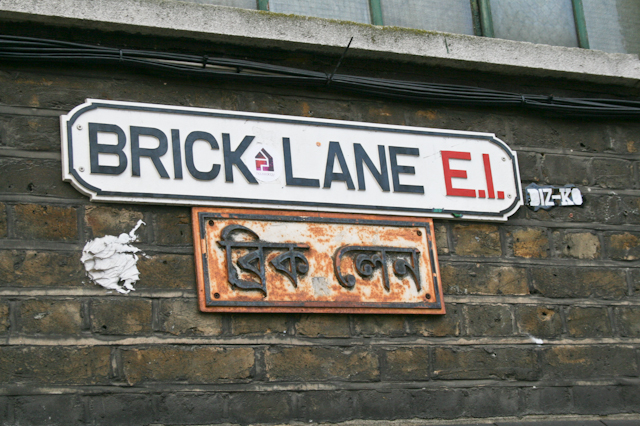 There nearest stations to this East London shopping and eating extravaganza are Aldgate East (District and Hammersmith & City Lines) at its southern end, or Shoreditch High Street (on the Overground) at its northern (well, northeastern) end. Old Street (Northern Line) and Liverpool Street (Central, Circle and Hammersmith and City) are around a 15 minute walk away so also suitable to use. Especially because it’s an interesting way from both!

It’s best to start at the northern end of Brick Lane unless you particularly want to dive head first into a curry. Right at the junction of Bethnal Green Road, you’re already thrown right into the typical action of Brick Lane – the vintage shops, the bagel (beigel) bakeries, the crowds. It’s worth pointing out here that there’s a market on Brick Lane on Sundays which sells and right proper mix of stuff – everything from quirky antique knick knacks, to things that are trying to be quirky antique knick knacks, to – putting it perhaps a little impolitely – cheap crap. (Sunglasses, anyone?) As part of the Sunday market, about a third of the way down (the area around the rail bridge), there’s also plenty of food stalls too. Although, trust, obtaining food on Brick Lane on the weekend will not be a problem for you.

So, as mentioned, one of the first vintage shops you come to is Hunky Dory Vintage at 226 Brick Lane, a cute little place with mainly older vintage pieces for both girls and boys. Opposite is Fika, a quirky Swedish place that’s great for a coffee break, or a Swedish meatballs break – because, thanks to IKEA, who can resist those? Close by are the two famous bagel shops – Beigel Bake and Beigel Shop; it’s hard to miss either, what with the massive queues snaking out of the door of both. Beigel Bake at 159 Brick Lane edges it between the two, and it’s also the oldest bagel shop in London. Try a bagel with a salt beef filling; at only a few pounds, this is most definitely a London Budget Tip for an exceedingly cheap bite to eat! If sweet treats are more your kind of thing, take a few steps further down Brick Lane to Kahalia for an absolutely amazing variety of cakes. But there’ll be queues here, too! 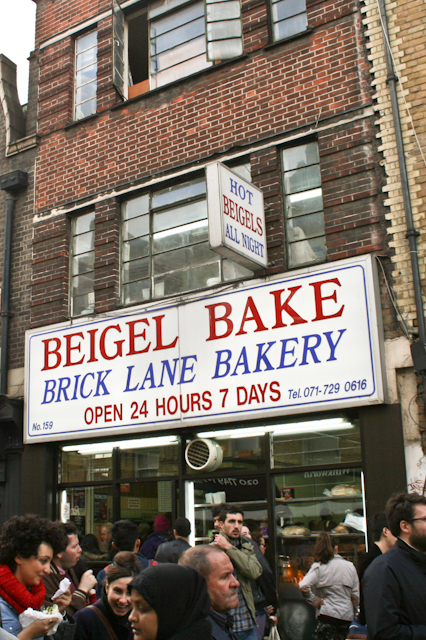 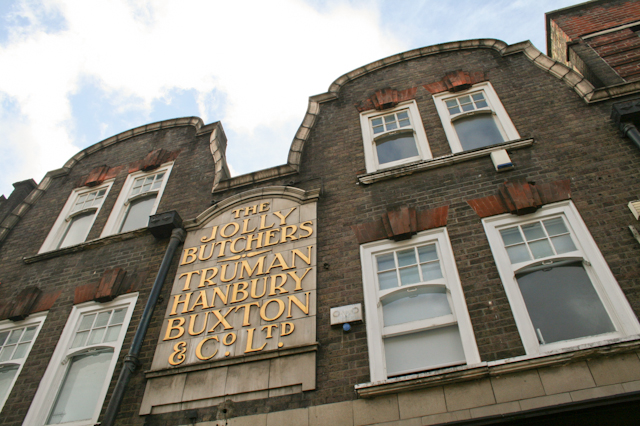 At 131 Brick Lane you’ll come to This Shop Rocks, with its mind-boggling selection of vintage stuff. There’s literally – and I do mean literally – everything here: clothes, books, instruments, furniture, crockery, and all manner of other things in between. In fact it’s a little hard to walk around the shop for the amount of things it contains – but it’s definitely worth a look. 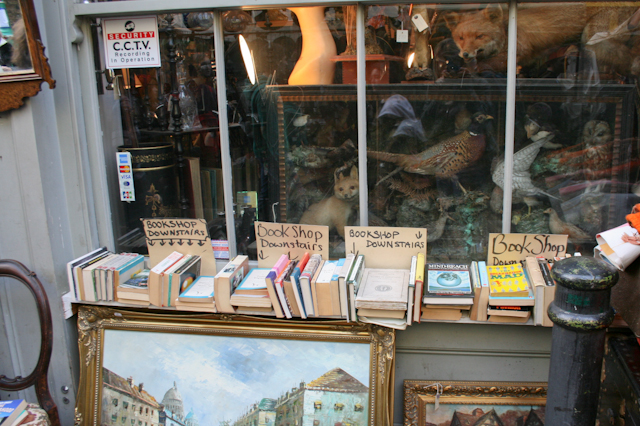 What does the fox say? (at This Shop Rocks)

On the corner of Cheshire Street and Brick Lane is The Vintage Store, with a pretty decent selection of vintage pieces from the 1960s, 70s and 80s. Plenty of denim cutoff shorts and sequin tops. And shoes! It’s worth heading down Cheshire Street too, for there’s a number of little boutiques and cafes here. House of Vintage stocks largely 1940s, 50s, and 60s items, whilst Vintage Basement has more of a mix of pieces. Further down is the highly recommended Morena Bakery, a Paraguayan-inspired cafe. It’s a great place to try some South African delights – duche de leche flavoured cakes and alfajores. Most of all, give the yerba mate tea a try, served in a traditional gourd with a metal straw. 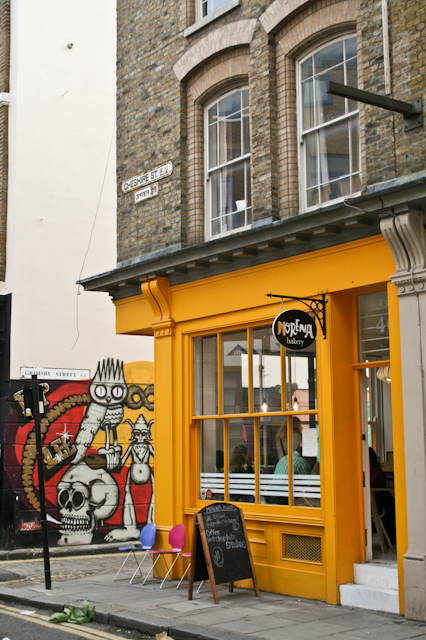 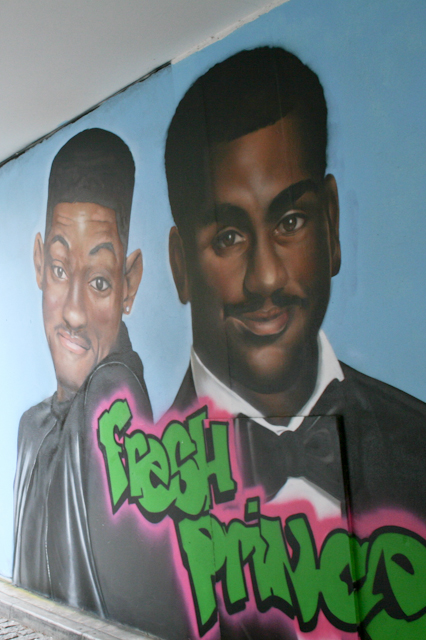 Back on to Brick Lane, you’re fast approaching the railway bridge where a number of food stalls are present on a Sunday. In amongst the regular pulled pork, pastries, Asian goodies, empanadas (is that a regular thing these days?) is The Poutinerie, serving poutine, the Canadian dish of french fries, gravy and cheese curd. Very intriguing – I’m going back soon to give it a try! (Turns out, according to their Facebook page, that the Sunday I visited was their first time at Brick Lane Market!)

Past all the food stores, you’ll come to a large and well-organised Rokit shop. In amongst the clothes, there’s a decent selection of cowboy boots, handbags and accessories. A bit further on Brick Lane you’ll come to a large brick building that has few external clues as to what treasure it holds inside. The Boiler House – so called as it served that function for the Old Truman Brewery – has a truly astonishing collection of food stalls with many unusual offerings in amongst the more common Chinese, jerk chicken and Mexican stalls that you commonly find. How about…gnocchi with rabbit stew? Malaysian pancakes? Ethiopian? My new favourite food obsession, Venezualan arepas (corn pancakes). There’s some outdoor seating space and a bar serving drinks as well, so this is a great place to rest your weary feet and nom down on some tasty food. And when you leave, don’t forget to look up and marvel at the Truman chimney! 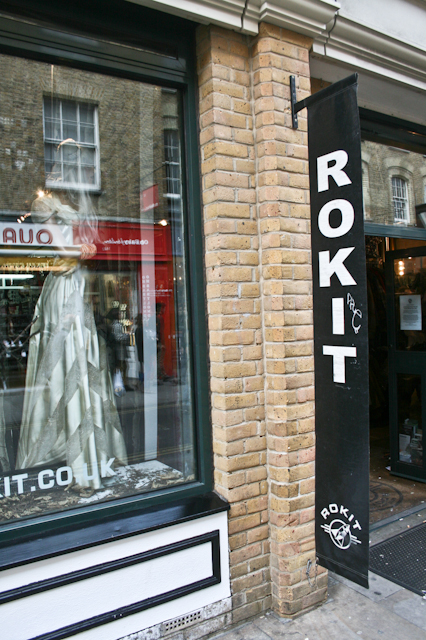 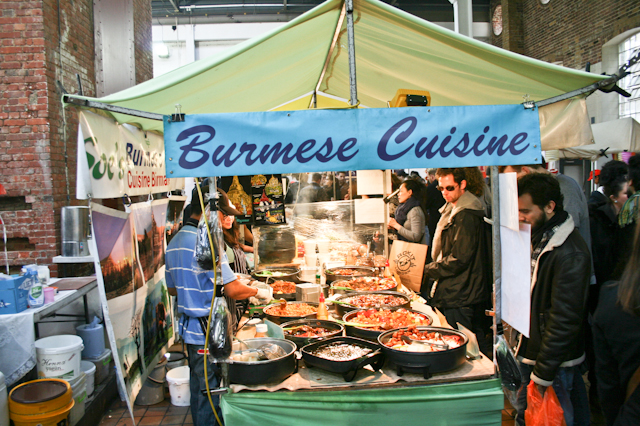 Inside The Boiler House 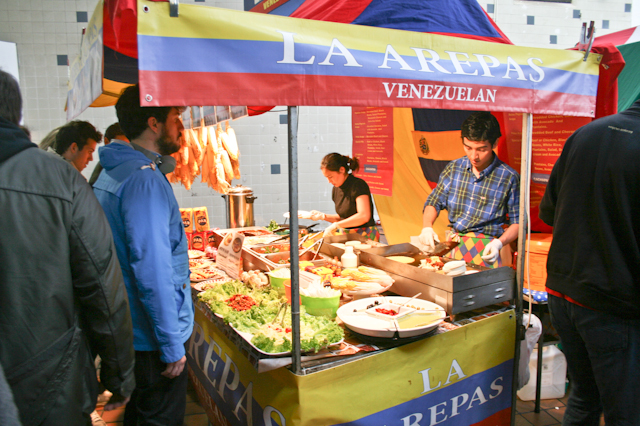 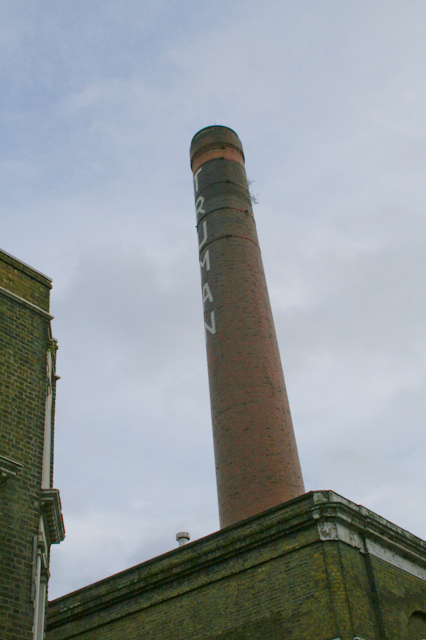 Further down Brick Lane you’ll pass a couple of great nighttime venues – 93 Feet East and Vibe Bar (save these for later in the day) – on your way to the Backyard Market. This is well worth a look as, by and large, most stalls sell handcrafted items – jewellery, clothing, homewards, baby clothes, greetings cards, photographs – and there’s little in the way of cheap tat. There’s also a little cafe by the entrance that sells very decently priced coffee (or mulled wine for the winter months). 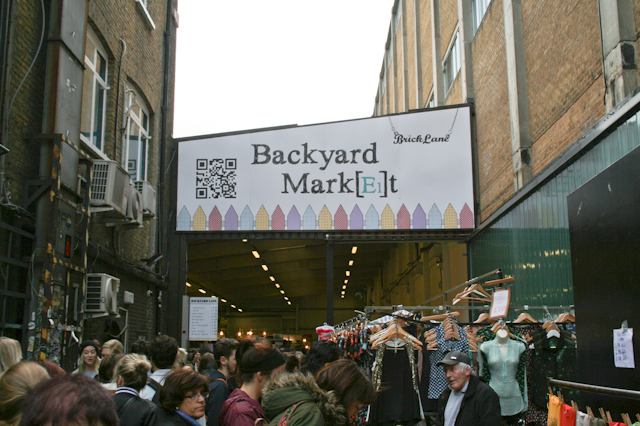 Almost opposite is a courtyard that contains a few trendy establishments and cafe-bars; here there’s a large Rough Trade, the independent record shop. Next to it is the fantastic Big Chill Bar, from the same people as the Big Chill festival, and packed even on a weekend afternoon. Just around the corner you’ll come to Ely’s Yard with…more food stalls. (You’re really spoilt for eating choice on a visit to Brick Lane, right?) There’s another quirky selection here, from meaty goods at Turner & Roast and Orange Buffalo (buffalo wings) to pies at Piepai to chicken at Mother Clucker. I gave the La Piadina Pronta a go – delicious flatbreads with Italian salamis and cheese as a filling. At only £3 for the half version or £5 for the full one, it’s also very budget-friendly! 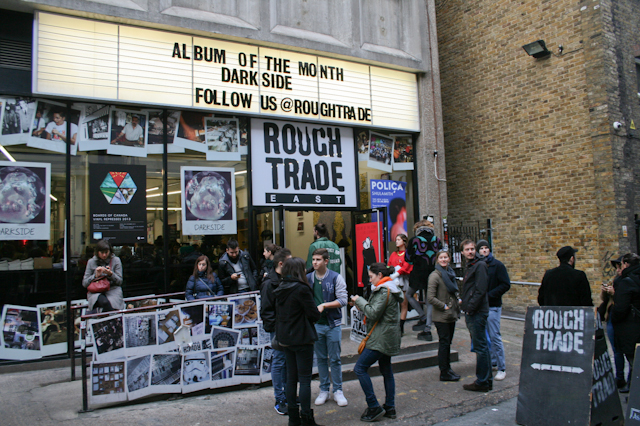 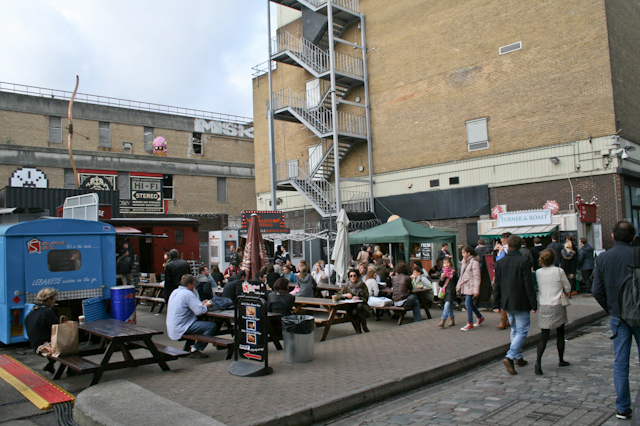 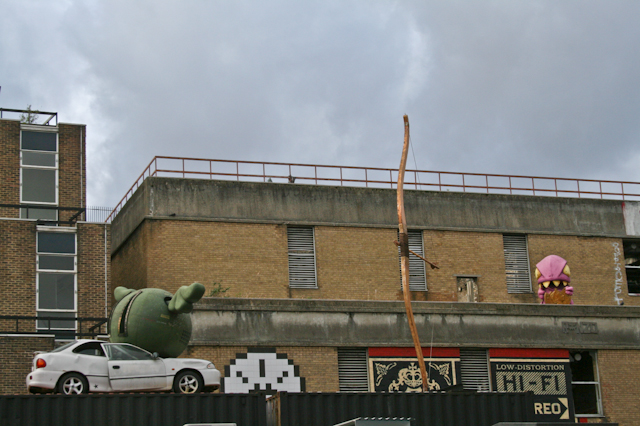 Errr…should we be worried (above Ely’s Yard)

Sweeping around the large courtyard, you’ll come to the Sunday (Up) Market. This indoor market is truly mind-boggling with the number and variety of stalls, so take a deep breath and step inside. You’ll be back out in a couple of hours. There’s also more food stalls in here too (similar to the Boiler House), so you won’t get hungry whilst you look around.

Just a little further on Brick Lane and you come to the Vintage Clothing Market. This large downstairs space has many traders selling their vintage wares, and it’s another good place for a retro rummage.

Now we come to the start of the curryhouses of Brick Lane. If you’re after a curry (HOW? with all the food you’ve been eating so far?!) it’s sometimes a little galling trying to pick a place from the selection, especially as you’re being encouraged to come inside by all the men that stand in the doorways. Some places are BYOB, but there’s little mini-marts around here to buy your wine or beer selection. I’ve tried City Spice (138 Brick Lane), Preem & Prithi and The Shampan and have enjoyed them all.

Phew! Who knew visiting Brick Lane could be so exhausting? And require the consumption of so many calories! 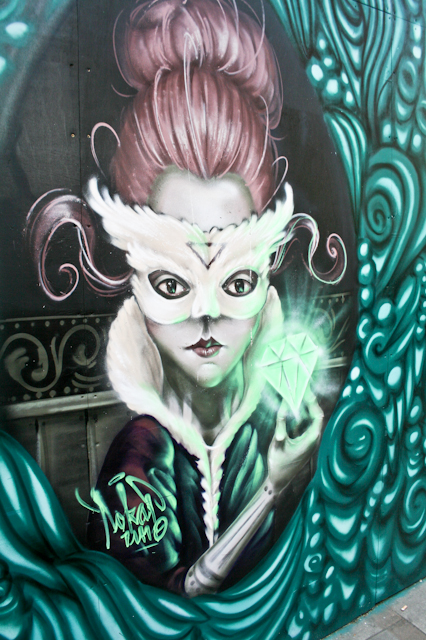 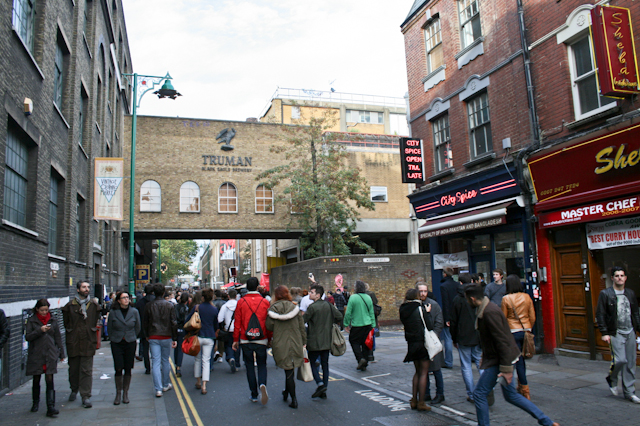 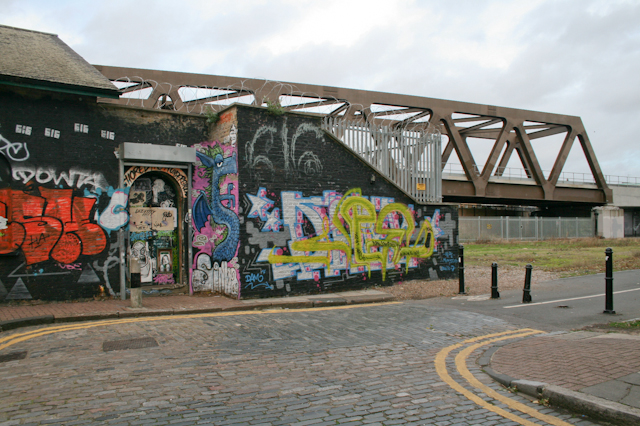 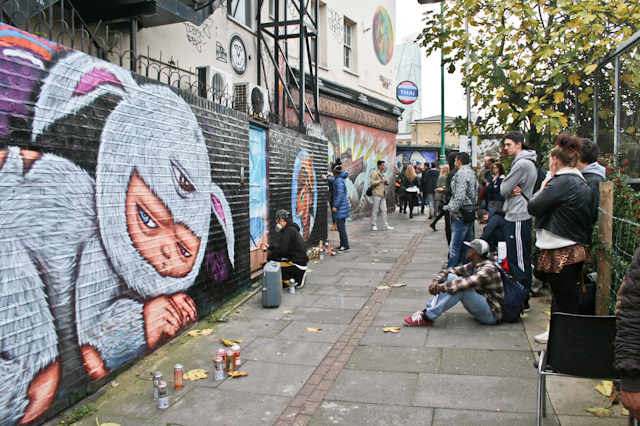 Street art in progress and audience