You are here: Home > Camden Beach – chilling on a beach in the centre of London

Camden Beach – chilling on a beach in the centre of London

Camden Beach, atop The Roundhouse in Camden (but sort of in Chalk Farm, really) opened up at the end of last month to give us Londoners an opportunity to stretch out and relax on a “beach”, right in the heart of the city. Open for the second year running, Camden Beach has real sand (really!), several bars, a BBQ, a pop-up fish restaurant, deckchairs, beach huts and more – plenty to occupy your time when you visit. 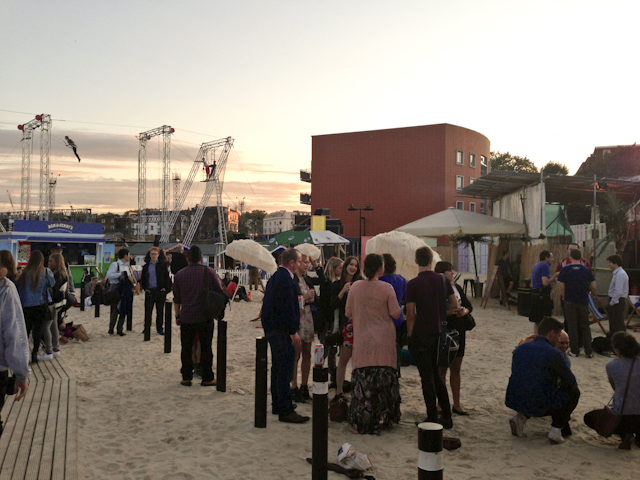 I picked a slightly chilly Tuesday evening – post a rain shower, even – to check out Camden Beach for the first time. So, not exactly ideal conditions, but at least that meant the venue wasn’t packed to the rafters with queues out the door, as I’ve heard happens on the gloriously sunny, hot and sticky days that we had not so long ago. Of course, that meant that I was dressed rather warmly – complete with a scarf, no less – and with proper shoes. No sinking my feet into the sand on this occassion. And certainly no need to make use of the foot washer – well, at least not without comical effect. (I didn’t try.)

Of course, even with the less than appropriate conditions, all the deckchairs were occupied and the beach huts looked pretty busy too. It’s not hard to see why this place is popular (around 40,000 visited last year) – the enclosed open space above the streets of London means its a very suitable place to kick back and relax without any of the noise of sitting outside a pub, or the general hustle and bustle (cyclists! Big, scary dogs! Ugly sunbathers! Crazy geese! Joggers that make you feel like you’re being really lazy!) of parks.

Whilst entry is free, there’s of course plenty of ways to part with your cash here. The central Tiki bar serves all the usuals, plus a selection of cocktails – although I was rather disappointed to see my favourite, the lagerita (a margarita in a tall glass topped up with lager – it’s a real thing, trust me) had been crossed off for the evening. The new JC’s lounge bar serves much of the same – albeit with a smaller selection of cocktails – and is located under cover, but with proper (outdoor furniture type) sofa and armchair seating…fancy! At the other end of the “beach” is Rum Shack A-Lack serving – what else? – rum cocktails. 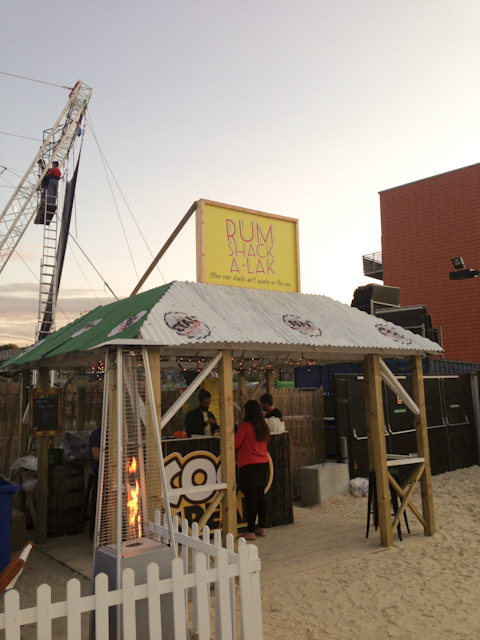 Food is provided by the Arkansas Cafe, which is essentially a BBQ hut – so think burgers, sausages and that kind of thing – or the proper sit-down affair that is Fishy Business, a pop-up restaurant by the amazing Made in Camden restaurant that’s adjacent to The Roundhouse. There’s also a Ben & Jerry’s stand to get your beach ice cream fix at, and a small indoor shop for sweets, popcorn and the like. 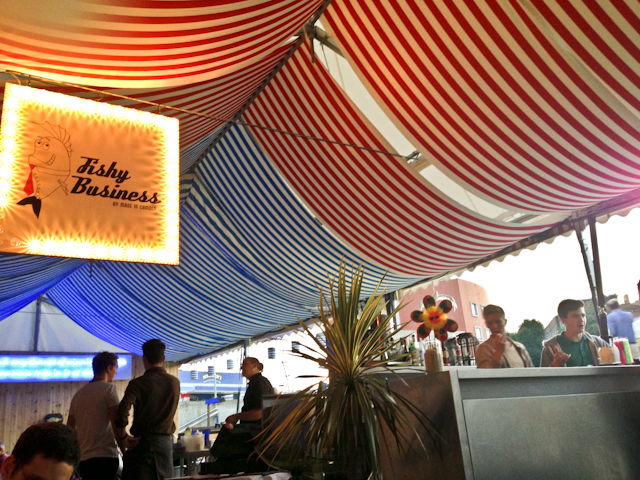 Under the awnings of JC’s/Fishy Business

Did I forget to mention the ping pong? Well up until now, I clearly have… There’s two ping pong tables (one indoor, one outdoor) which seemed to be in constant use when we were there. So you can be all set for some beachside exercise, after all those burgers and cocktails!

One thing not particularly mentioned on the official site or press release is the Gorilla Circus flying trapeze school that’s set up by the back of Camden Beach. Pre-booking is necessary to attend a class there – but the trapeze acrobatics that take place as you chill on the sands of Camden (!) sure make for a nice background setting! 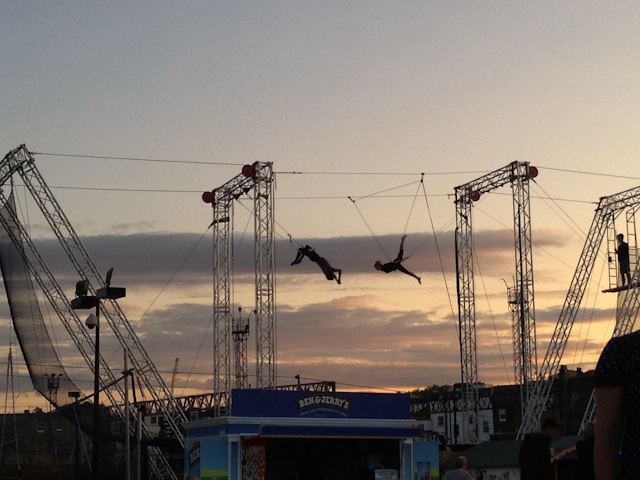 Well, it is free. So that’s pretty good value. A couple of beers (cans of Red Stripe) cost just over £8, so that’s roughly the same to many other pubs and bars in the area – not exactly cheap, but par for the course. Food (at the BBQ stand) seemed reasonably priced – you’d get change from a tenner, and I suppose eating a burger in a deckchair whilst wriggling your toes in the sand isn’t an experience you’ll come across often in London!

Is it worth it?

Camden Beach is open daily until 24th August – so make sure you pop down soon!

drinking, Eating, Free, Is it worth it?, North London, Reviews