You are here: Home > Swimming in Hampstead Heath Ponds

Anyone that’s been in London the last couple of weeks knows that we’re in something of a heatwave. Which is great, because there’s truly no better place to be in the world than London, when the weather’s nice!

Of course, London is very ill-equipped for hot weather. (And sometimes cold weather too…but let’s leave that for a post in winter!) From the stifling heat of the Underground (and also some buses) to the lack of air conditioning (apart from some offices and premises where it’s turned up to the max so everyone’s freezing), the city isn’t all that great if you actually have to do something in the heat. Like work. Go to school. Live. Anything, really.

There are of course assorted methods for cooling down during these hot summer days and nights. But short of spending the entire day in a shady pub garden drinking cider (which is somehow frowned upon if you do that too many days in a row…), taking a dip in one of the city’s pools, lidos or swimming ponds is certainly a great way of keeping cool.

I went to try out swimming in Hampstead Heath ponds yesterday, a busy Sunday that saw the air temperature reaching a not-exactly-sweltering-but-still-hot 29C. Although they do have toilets and changing facilities on site, I decided to do away with all that faffing and turn up in my swimming gear (under clothes!), hoping to dry off in the sun, post-dip. 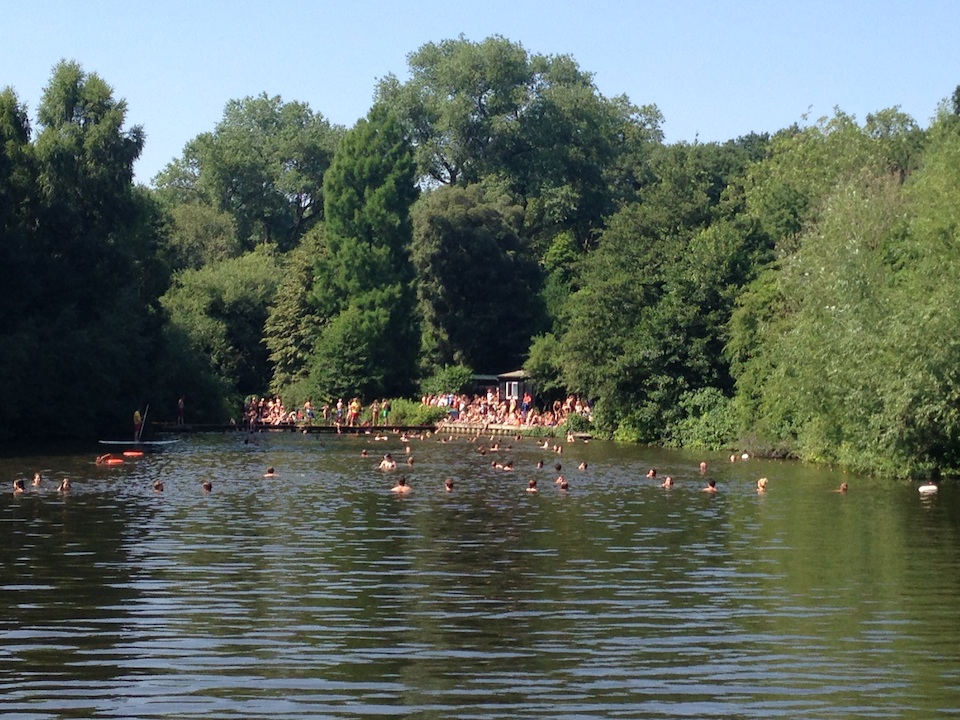 The mixed pond, as viewed from the path that leads you to it

It costs £2 to swim in Hampstead Heath Mixed Ponds, payment taken at the front gate by a slightly bored looking man. Having said that, just as I entered a bunch of young ‘uns (well, people in their 20s) walked past, asking him “Can we just take a quick look?” before then saying to each other once they reached the pond, “He knows we won’t be back, doesn’t he?” (Naughty! It’s only two flippin’ pounds!)

As I mentioned, there are some small facilities there for changing and the like. The actually pond side area is tiny, and basically just a small patch of grass. Which was – of course – utterly rammed with people lounging about on their towels, listening to their iPods, drinking Becks. (Hello, London show offs!) The pond is also manned by lifeguards, although we thought three was a little excessive for the number of people actually swimming in the pond – around 30.

I chose not to dive in (*contactlensexcuse*) so lowered myself down the steps off the pontoon. Initial thoughts? “Argh, this is freezing!!” Then – “oh, it’s not too bad, actually!” The official page claims the water temperature is in the low 20s, which I’m not 100% sure I believe, but it certainly is pleasant and more than bearable.

Although it’s fun swimming in this London “pond” there’s not much to do apart from…well, swim. There’s no shallow part so you have to keep swimming or treading water. There’s nowhere to lean on (apart from the rope cordoning off the area, but that rapidly sinks if more than one person tries to hold on to it) and it looks like you’re not supposed to do anything but swim – we saw someone’s ball being confiscated by a lifeguard.

But! I’d highly recommend it. Certainly refreshing, definitely cheap, and absolutely a very unique London thing to do!