You are here: Home > Is it worth it? Review: Emirates Air Line

Is it worth it? Review: Emirates Air Line

We’re starting a new series of posts here on London Budget that come under the “Is it worth it?” title. Whilst there’s plenty to do in London either for free or for low cost, we know that many visitors to London won’t want to miss out on some of London’s best known sights and may save up their pretty pennies to able to experience some of these. So we’ll start to review some of these sights and experiences to let you know whether it’s worth visiting and spending your money on.

First in the series is the Emirates Air Line in East London, a cable car link over the River Thames that opened in mid 2012. It’s a unique new mode of transport for London…and yes, it does even get a mention on London’s Underground map – with the official name (arising because of a sponsorship deal) meaning that it’s the first time a company logo has appeared on said map. 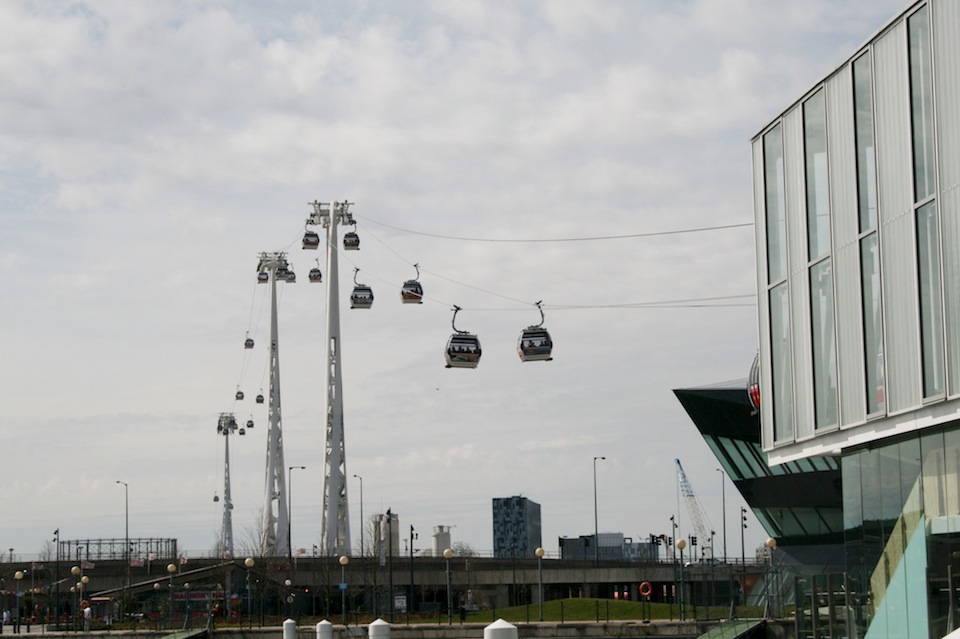 The Air Line links the Greenwich Peninsula – right where The O2 entertainment complex is situated – to the Royal Docks, which is now home to the Excel Exhibition Centre. Commuters are encouraged to use the line – although I can’t imagine who’d really be commuting from one of these areas to the other, with both sides of the river already benefitting from good transport links. I suppose you might be working at an event at the Excel and want to get over to The O2 for some fun…but I suspect that it’s mostly tourists that use the Air Line.

I visited the Emirates Air Line on a recent Sunday, one of the first beautifully sunny days that London had had so far this year. Now, as sunny as it was, it was also rather windy – which meant, when we approached the Emirates Royal Docks station, supervisors started advising that the cable car would be closed “for about 20 minutes” because of the strong winds! I fully understand that this is a weather-dependent means of transport, but I didn’t really feel that the winds present that day were really all that strong, although there were certainly sudden gusts. Bear that in mind – if you decided to attend on a windy day, you might find the cable car temporarily closed. A walk around the local area (which doesn’t have much in it – a few hotels, the odd food stall and cafe, the Excel centre, and then a decent place to take photos over the refurbished docks) brought us back to the station where we saw the cable car was now running again. Before another sudden gust of wind could prevent us from boarding again, we swiftly went through the ticket gates and waited to board one of the pods – which can’t have taken more then five minutes.

Each pod sits 10 people, although you’d probably be unlucky to be squeezed in with so many at once. We had seven people in our pod – apart from us two, there was a mother and father with their daughter, who was slightly scared by the wind-induced swaying of the cable-car (at times I felt the same, though part of me also loved being shaken about slightly in the wind!), and another father and his son who timed the journey on a iPhone. (The conclusion of which was that the journey took slightly longer than advertised because of the weather – so we had had more value for our money. Result!)

Going on the Air Line is certainly lots of fun, and a very unique thing to do in London. However, if I’m honest…there’s not that much of note to see from the cable car as you ride on it, purely because of where it’s based in London. On the London Eye, as well as being almost directly opposite the Houses of Parliament, there’s many famous sights to see in all directions. There’s not too much in this part of London – the O2, of course, which is a striking, continuous sight as you rise up and then down on the cable car. The Canary Wharf area in the distance. The Olympic Park and its various bits and bobs even further away in the distance. And then some non-descript buildings and rather a large amount of building sites in the nearby area. 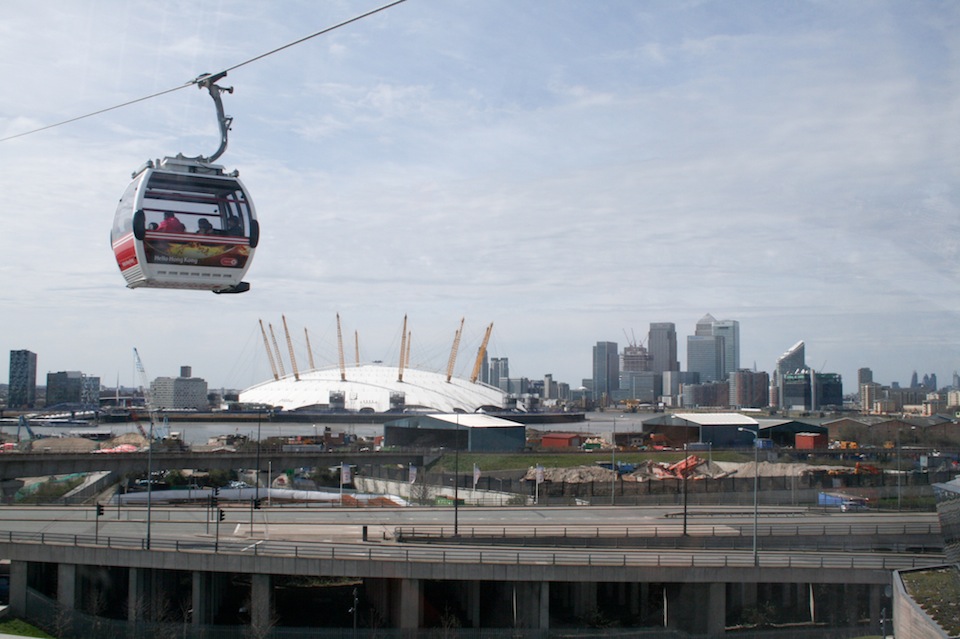 View of The O2 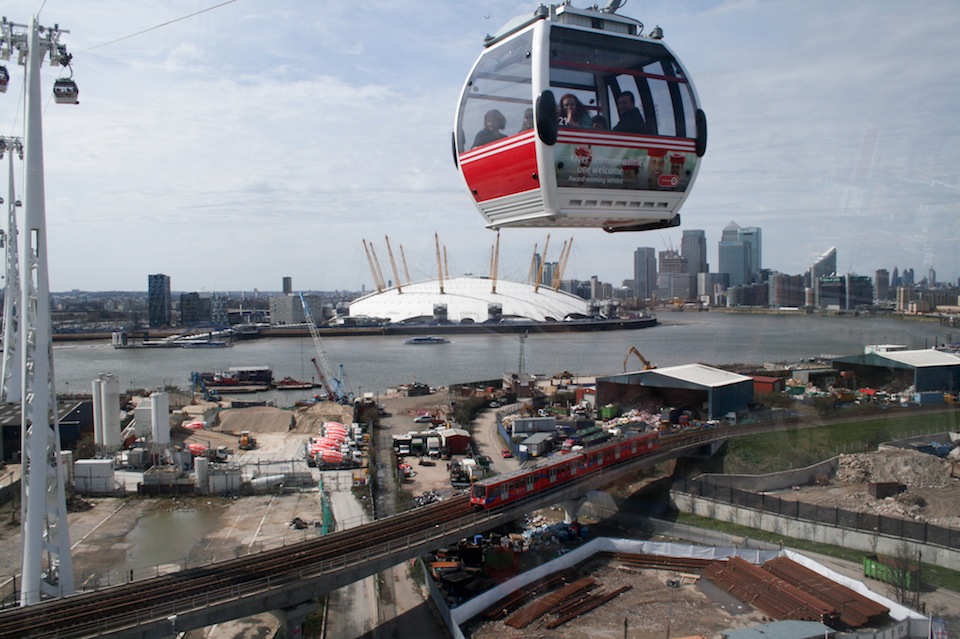 View of the construction sites 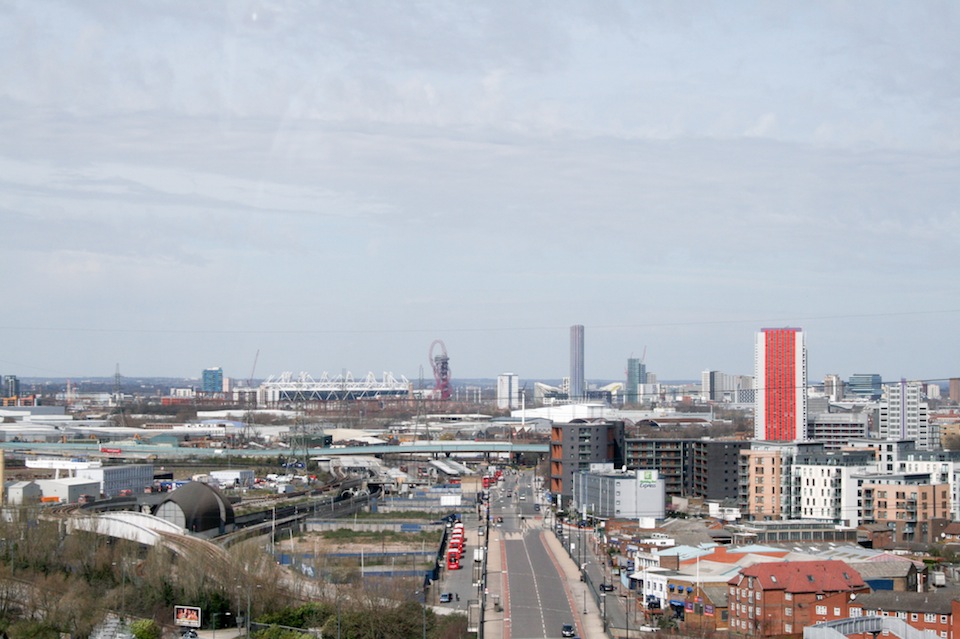 The Olympic Park in the distance

Emirates Air Line – Is it worth it?

Yes! Despite its location, it’s still a very entertaining thing to do in London. Travelling up and over the River Thames is such a unique experience and overall, the whole operation is certainly run very smoothly and professionally. As a special treat, the price isn’t too bad (see below), especially so if you get a discounted ticket, and it’s a heck of a lot cheaper than any other comparable “sky high” experience (London Eye, the Shard…err…a helicopter day out??). Head over to the cable car now to still enjoy it whilst its relatively new and shiny. As we approach the summer months, why not try and time your visit for sunset?

Getting to the Emirates Air Line

Both ends of the Air Line are located close to other forms of public transport – the DLR stop at Royal Victoria (one stop from Canning Town Jubilee Line Underground station) on the north side of the Thames, and North Greenwich (Jubilee Line) on the south side. So getting there, using the Air Line and travelling away is relatively easy.

If you’re having a special day out, you might also like to know that you can travel on from Greenwich by boat. Boats depart Greenwich pier towards London, making stops at piers by Canary Wharf, the Tower of London/Tower Bridge, Bankside, Blackfriars Bridge, the London Eye and the Houses of Parliament. Combining a visit on the Air Link and then a little river trip is certainly a nice way to spend a couple of hours – using two alternative means of transport in London!

Tickets for the Emirates Air Line

If you have an Oyster pay-as-you-go card (and every sensible, budget-conscious visitor to London should!) then you can use these to board the Air Line, which also give you 25% off the normal fares – meaning, £3.20 for adults and £1.60 for children. There’s Oyster pads and ticket barriers to go through much like any Underground station.

If you hold another type of Oyster card (perhaps a monthly Oyster card or a Freedom pass) or a paper travelcard, these won’t work on the Air Line insofar as you will still need to buy an additional ticket. However, do still bring them along – by presenting them when purchasing tickets, you can also take advantage of the discounted fares. 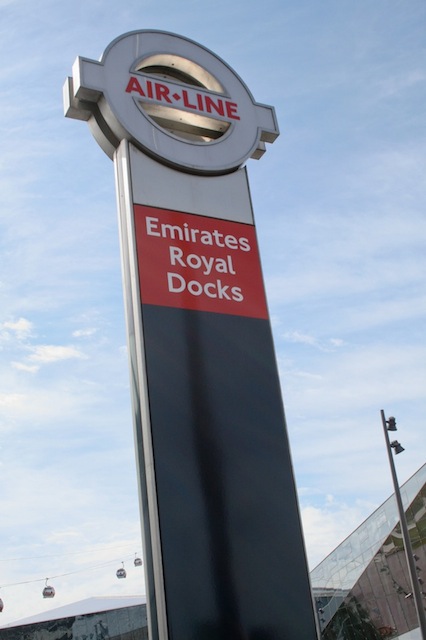 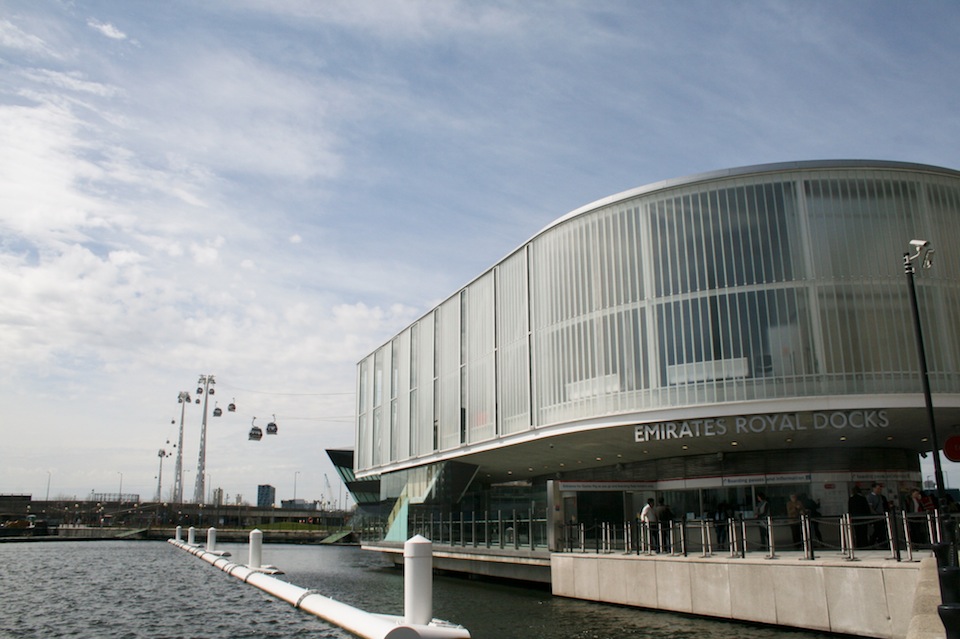 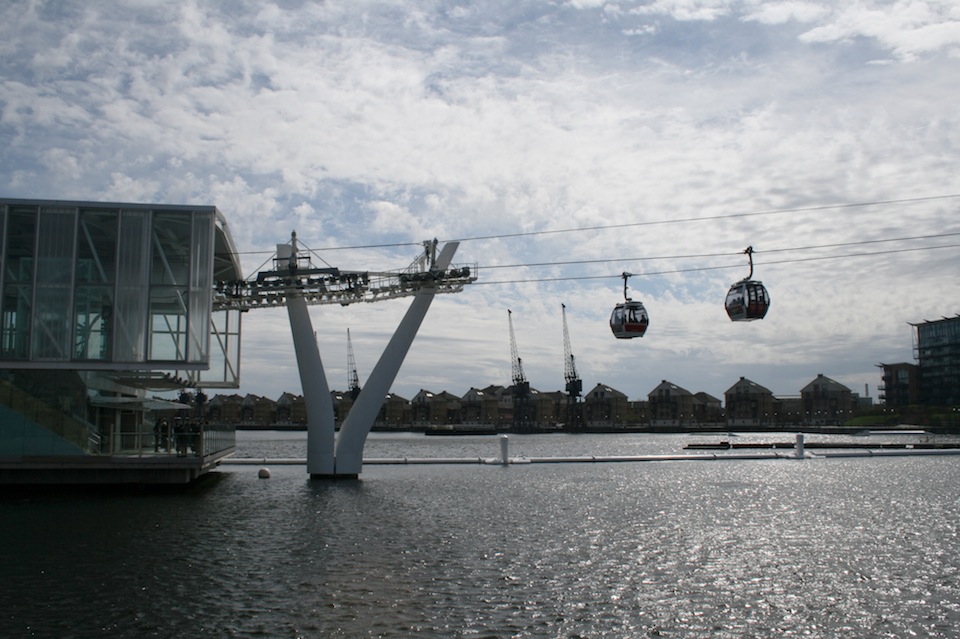 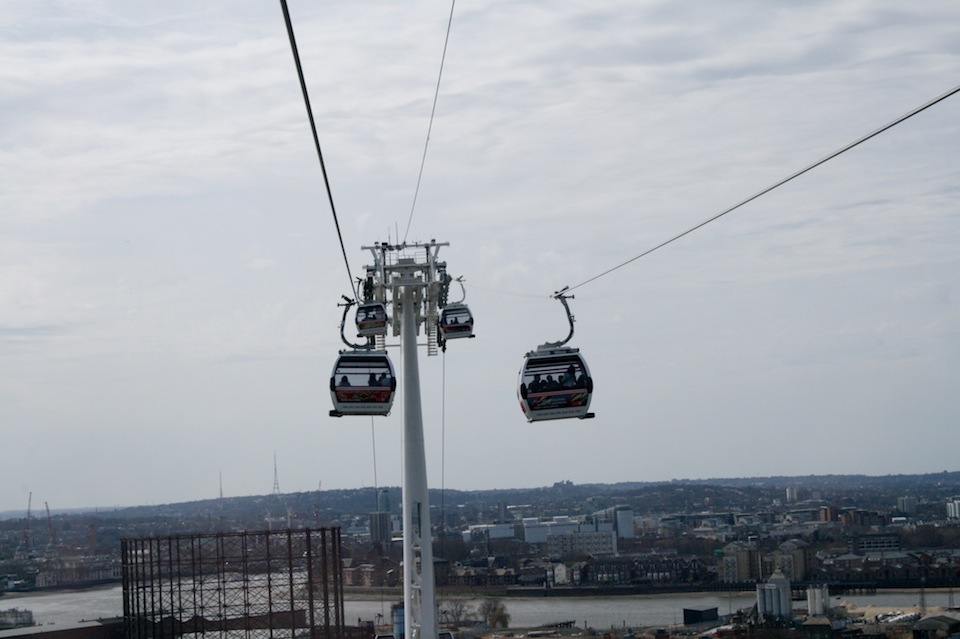 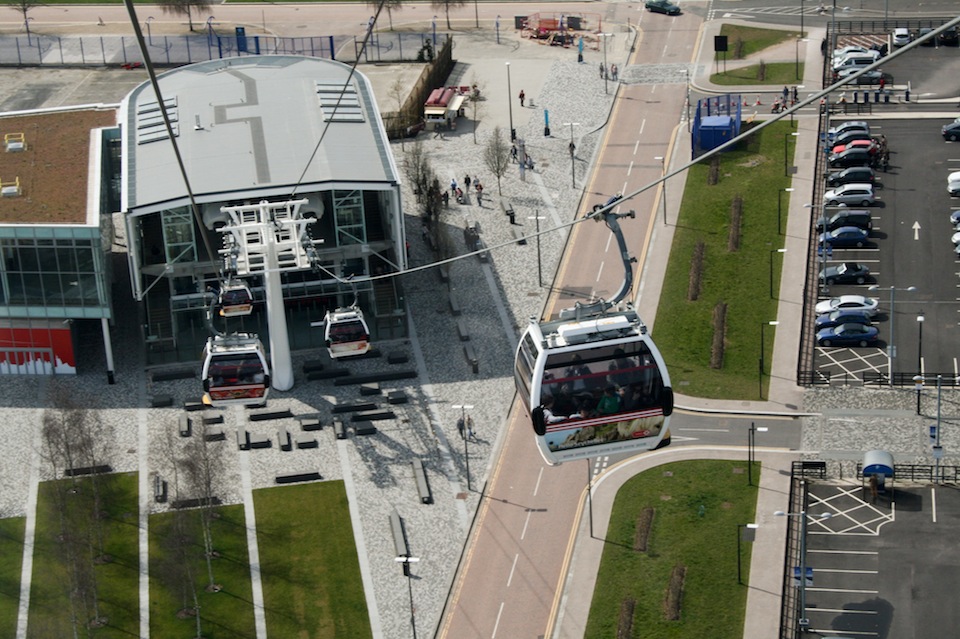 Coming in to land…so to speak 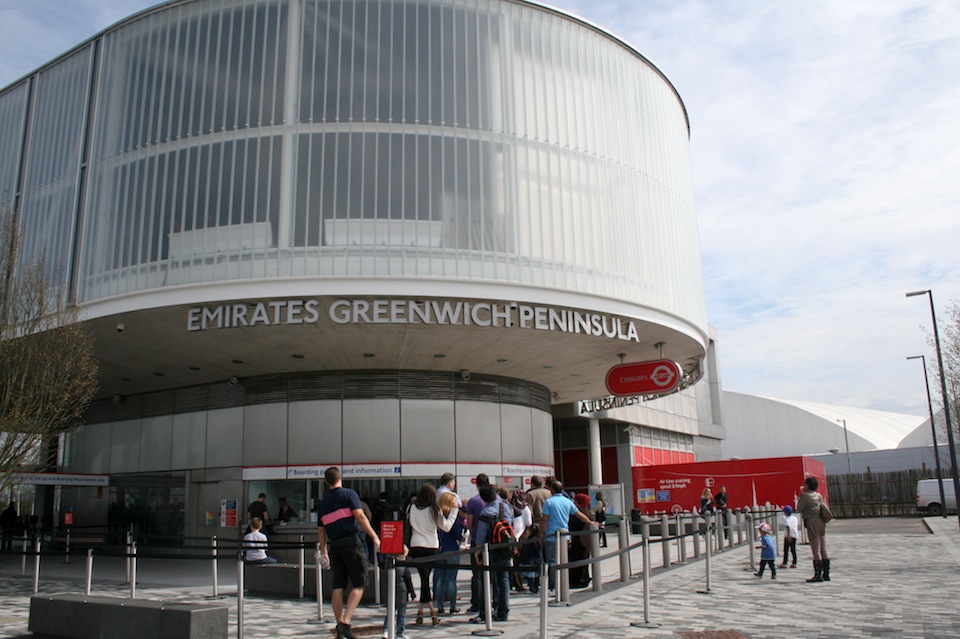 Is it worth it?, London Transport, Reviews